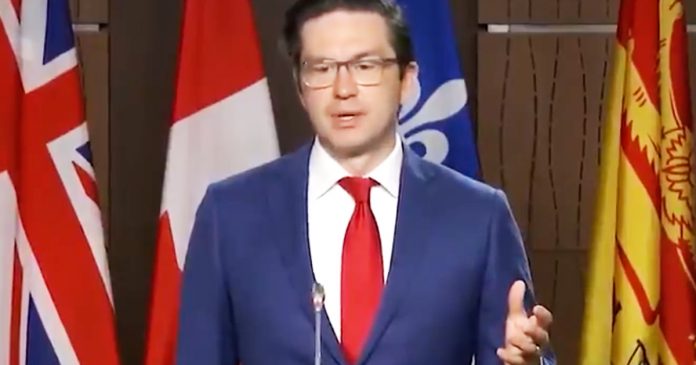 The Trudeau government is to blame for Canada’s sluggish job numbers in June, according to Conservative MP Pierre Poilievre.

On Friday, Poilievre held a press conference to respond to the latest unemployment numbers. Statistics Canada revealed that the country lost 33,000 full-time positions in the month of June despite provinces reopening their economies and lifting or easing public health restrictions.

“This is a massive surprise. We thought the economy was reopened. It was assumed there would be a massive surge in job gains, but in fact 33,000 Canadians lost their full-time jobs,” Poilievre said.

Since the early months of the pandemic, the Conservatives have been sounding the alarm on Trudeau’s unprecedented spending but to no avail.

Canada’s federal debt surpassed $1 trillion dollars this year following a frenzy of pandemic spending by the ruling Liberal government. Further, in its latest budget, the government revealed a whopping deficit of $354 billion with no plan to pay down the debt and balance the books.

“This is a disastrous economic record – one we warned about and the government ignored our warnings, and now Canadians are suffering the consequences for their failures,” Poilievre said.

“When it comes to overall employment, the government fell 340,000 jobs short of its budget promise to regain all of the lost jobs from the pandemic,” the Conservative MP said.

“So in other words, they broke their promise. We’re actually losing full-time jobs, we have the second-highest unemployment in the G7, the biggest deficit in the G20 as a share of our GDP, housing prices are up 30% in one year making homeownership impossible for most Canadians and inflation is at a 10-year-high.”