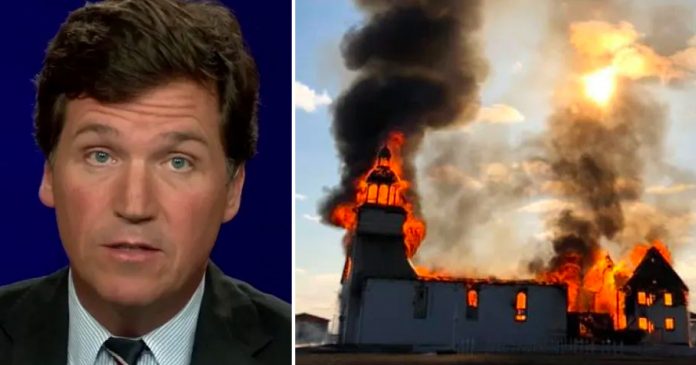 Fox News host Tucker Carlson slammed the number of public figures who have refused to condemn the ongoing spate of church burnings in western Canada.

“All of a sudden, Canada looks a lot like the Soviet Union. Seems like we’re exaggerating a little bit but [leftist groups] are burning Catholic and Anglican churches in recent days,” Carlson said.

In recent weeks, inspired by recent claims of burial sites located at former residential schools, far-left radicals have vandalized or torched at least 25 churches and knocked down several prominent statues.

Elected officials including NDP MP Niki Ashton and Prime Minister Justin Trudeau have excused the behaviour of the mob, justified these riots, and in some cases, even cheered them on.

Carlson took particular aim at BC Civil Liberties Association executive director Harsha Walia, who tweeted “burn it all down” in response to an article on two Catholic church burnings in British Columbia.

“This is not the Spanish Civil War, this is now — in Canada,” Carlson said.

In addition to the torching of places of worship, the American media personality also acknowledged the toppling of the Queen Victoria statue by vandals on the grounds of the Manitoba Legislature.

Despite calls for calm from Indigenous leaders, the church burnings continue. True North is keeping track of all the latest church burnings and acts of vandalism. Check out our interactive map here.