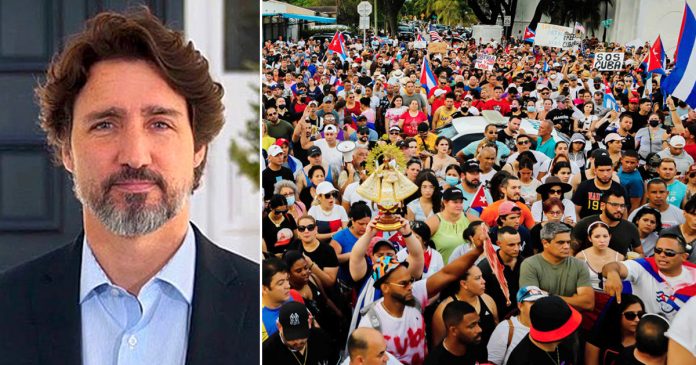 Prime Minister Justin Trudeau did not have an unkind word to say about the Cuban government’s suppression of protesters.

Trudeau was asked Tuesday if he would condemn communist regime’s horrendous human rights abuses or if he agrees with Cuban President Miguel Díaz-Canel that the US is to blame for the crisis.

“Canada has always stood in friendship with the Cuban people. We have always called for greater freedoms and more defence of human rights in Cuba,” Trudeau said, stopping short of condemning the Cuban government.

“We will continue to be there to support Cubans in their desire for greater peace, greater stability and greater voice for how things are going.”

Reports from Cuba indicate that more than 100 people have been arrested or are reported missing after the communist government cracked down on the largest protests in decades. Journalists are also being arrested, including ABC’s Camila Acosta.

CNN witnessed multiple people being arrested and thrown in the back of vans during protests in Havana. The Cuban government also imposed an internet blackout, preventing Cubans from sharing images and videos of the protest.

Due to the communist government’s poor handling of the COVID-19 pandemic, the Cuban people are facing the worst economic crisis since the fall of the Soviet Union. As a result, there is a shortage of basic goods and electricity in the island nation.

During a televised government meeting, Díaz-Canel blamed the US for the country’s economic woes and also said the protesters are criminals.

This isn’t the first time Trudeau has warmed up to the communist regime in Cuba.

When former Cuban President Fidel Castro died in 2016, Trudeau released a glowing statement in memory of the communist leader.

“Fidel Castro was a larger than life leader who served his people for almost half a century. A legendary revolutionary and orator, Mr. Castro made significant improvements to the education and healthcare of his island nation,” Trudeau said.