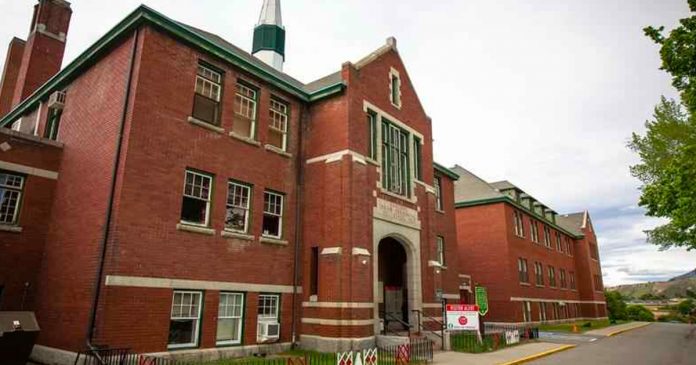 The Tk’emlúps te Secwépemc First Nation held a press conference Thursday morning in Kamloops, BC to present the findings of the ground-penetrating radar report they commissioned.

In late May, the Tk’emlúps band announced that ground-penetrating radar (GPR) detected the remains of 215 children who were all students of the Kamloops Indian Residential School, the largest school in the Indian Affairs residential school system.

Dr. Sarah Beaulieu of the University of the Fraser Valley, in her overview of the Kamloops GPR research, stated that the total number of unmarked graves at the Kamloops Indian Residential School landscape is “currently unknown,” but that 200 sites remain as targets of interest.

This means that the previously publicized figure of 215 bodies, a number which went viral and has been used in activism campaigns across the country, wasn’t accurate. That number has now decreased to 200.

However, Beaulieu noted only forensic investigation – excavation – can confirm the existence of the graves. No excavations have occurred thus far and there are no current plans to excavate in the near future.

Tk’emlúps chief Rosanne Casimir claimed that some of the bodies detected were “as young as three years old,” though it has been pointed out that GPR cannot confirm any details about the bodies or how the individuals died. Rather, GPR detects irregularities and disturbances in the earth, which can point to a potential burial site.

Casimir has made it clear in past remarks that “this is not a mass grave, but rather unmarked burial sites that are, to our knowledge, also undocumented.”

According to the Canadian Archaeological Association, “it is not possible to identify grave locations or the absence of graves with 100% certainty using remote sensing” and that the archaeologist will likely “assign different levels of confidence to their results in much the same way as a weather forecaster predicts the likelihood of rain.”

Beaulieu has not assigned a level of confidence to her report.

The land surveyed on the residential school grounds was chosen because in the late 2000s a tourist allegedly came across a juvenile rib bone in the soil, and around the same time Simon Fraser University’s archaeology department excavated a child’s tooth. Beaulieu noted that “a juvenile tooth is not an indicator of loss of life, but given both discoveries, this possibility should not be discounted.”

Chief Casimir called on Prime Minister Justin Trudeau to release the Kamloops Indian Residential School attendance records – documents that are within custody of the Canadian government.

“To the Prime Minister of Canada, Justin Trudeau… I look forward to a fulsome conversation where we can finalize the details of the federal government providing needed supports, as well as access to our student attendance records, to continue to shed light on missing children buried in our care.”