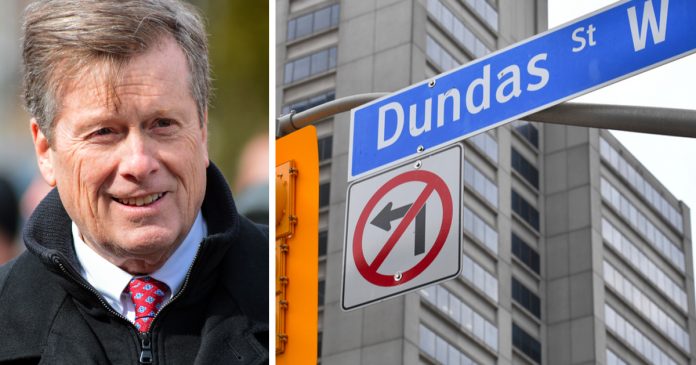 It was preordained that a majority of guilty white men and women on Toronto council would vote to rename Dundas St. this week given the anti-colonial, anti-white Supremacy focus of the current progressive narrative.

But what was particularly concerning about the outcome was how 17 people on council – Mayor John Tory included – were prepared to set such a dangerous precedent based on questionable research and the say-so of 25 members of the afflicted black and Indigenous communities.

They, and a consultant who doesn’t even reside in Toronto, were permitted to determine that the activities of a man few knew from 1776 were racist and offensive to Indigenous and black groups.

Even Tory admitted he had no idea who Henry Dundas was or that Dundas St. was named after him until the vocal easily offended minority brought the street’s namesake to the mayor’s attention.

The consultant from QuakeLab–Sharon Nyangweso – was selected based on her expertise with “equity seeking groups,” according to city manager Chris Murray who sported an orange ribbon supporting the Indigenous on his suit jacket during the council debate.

Nyangweso, who made $66,100 for her efforts, was brought on board to conduct “discovery sessions” with the black and Indigenous communities in Toronto.

Her purpose, apparently, was to determine whether the name should be changed in its entirety as opposed to merely pursuing a far less costly and intrusive option such as posting a series of plaques acknowledging the history of the Dundas St. name.

But the $6.3-million-plus name change was always a slam dunk.

She was merely hired to recommend the name change based on a weak and highly biased consultation.

What came out loud and clear at council this week was that Nyangweso consulted only with the Indigenous and black communities – or about 25 carefully selected “woke” people – who all had a “visceral reaction” to anything but a complete name change.

It was confirmed after much questioning that no members of the general public were consulted – none of the 97,000 residents impacted – and there were only cursory discussions with the Business Improvement Areas representing the 4,500 businesses who will be forced to outlay the costs to change their signage and business supplies.

Murray defended the lack of broad consultation, noting that Nyangweso felt a public debate would risk raising anti-black and anti-Indigenous rhetoric and racism.

“These are very sensitive equity issues,” he said.

It would seem Nyangweso felt responding to questions from me would also raise sensitive issues (like what she did for $66,000).

She at first agreed to chat with me, giving me a variety of times throughout the week.

However, she subsequently wrote back and said the day had gotten away from her and “the remainder of the week is booked.”

The whole costly exercise was completely inappropriate given how many people in the city have suffered financially during the pandemic.

There are so many social and infrastructure issues facing the city. One wonders how any city bureaucrat has the time to review hundreds of global case studies, consult with 20 academic experts on the subject and to partner with the Toronto Public Library to put together a reading list on Henry Dundas.

How about fixing our roads before we even consider changing their names?

But even worse is that this decision – a token gesture that will do nothing to tackle racism – opens the door to more costly exercises led by the activists under the guise of a “Recognition Review” of city street and place names.

The vocal minority know it’s their time and they can exact whatever they want out of weak-willed politicians, no matter how foolish their request.

In fact, 12 additional Toronto streets have been named after slave owners.

I live on one of them.

According to city officials, there are 60 street names in total “which could require further examination in the future.”

No names will be changed at the moment, city officials say, but there will be a framework with guidelines developed to review other street names and monuments.

Before the council vote, the mayor opined that it was the “right thing to do – to no longer honour this man (Dundas).”

“It will do wonders for our reputation outside the city,” he said.

I’m afraid it won’t improve our reputation one bit.

In fact, it provides more reason for the rest of the country to mock Toronto for fiddling while Rome burns.