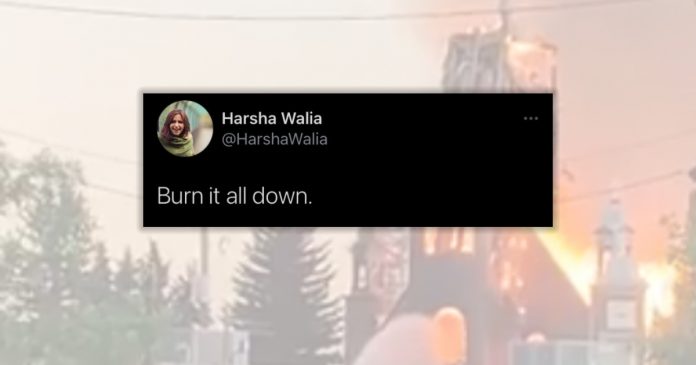 Two weeks ago, the head of the BC Liberties Association (BCCLA) Harsha Walla tweeted “burn it all down” in response to the torching of churches following the apparent discovery of graves at former residential schools.

On Friday, the BCCLA announced the resignation of Walla.

In a statement, the BCCLA board of directors claimed that Walla’s tweet did not convey the organization’s message accurately.

“Using a particular turn of phrase in that context left some people with the wrong impression about the values and principles to which we adhere,” it said.

“We regret the misunderstanding that was caused by the tweet and apologize for the harm the words caused.”

Walla’s tweet generated swift public backlash from Canadians, as many interpreted her tweet as encouraging arson. However, the BCCLA claims Walla was targeted because of racism and sexism.

“During the aftermath of the tweet, we encountered a wave of hateful commentary, fueled by the fact that our executive director is a racialized woman leader. Our executive director and staff were exposed to inexcusable racism and misogyny and threats to physical and mental safety,” the BCCLA statement said.

In recent weeks, 47 churches have been vandalized, burned down or desecrated.