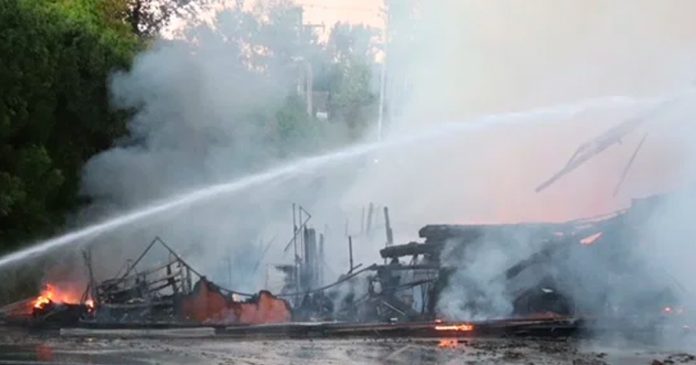 Another church has been targeted and destroyed by arsonists in Canada.

The St. George Coptic Orthodox church was engulfed in flames on Monday morning. Firefighters in Surrey, BC arrived at the scene at around 3:30am and were able to stop the spread of the fire to other buildings. However, the church could not be saved.

The RCMP is treating the blaze as suspicious and is currently investigating the incident.

Surveillance video showed a female suspect lighting items on fire at the door of the church on Monday morning.

“Our church was more than a building. It brought together a diverse congregation of Coptic, Eritrean, Iraqi, and Lebanese Orthodox believers,” the church said in a statement. “It was a place we built community, where we shared meals, where we married our youth, christened our babies and welcomed newcomers to the faith.”

Since the announcement last month of the apparent discovery of graves found near a residential school in Kamloops, BC, 48 Christian churches have been vandalized, torched or desecrated.

Although Indigenous leaders are denouncing these violent crimes, churches continue to be targeted by vandals.

While many Canadians have condemned these heinous crimes, a number of activists, academics and public figures have excused the recent church burnings and acts of vandalism.

When asked about condemning the ongoing church fires, Prime Minister Trudeau told reporters on July 2 that the anger of those committing arson was “fully understandable” due to Canada’s “shameful history.”

“I understand the anger that’s out there against the federal government, against institutions like the Catholic Church. It is real and it’s fully understandable, given the shameful history that we are all becoming more and more aware of and engaging ourselves to do better as Canadians,” said Trudeau.