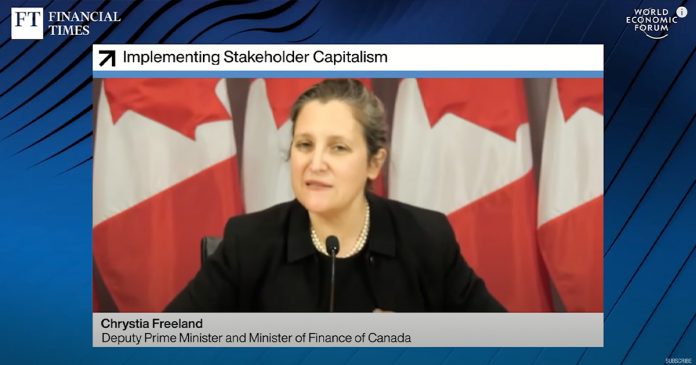 Documents released in response to an access to information request for information pertaining to Freeland’s remote appearance on a January panel at the World Economic Forum’s Davos Agenda included a $5,099.13 invoice for “minister’s media events” on Jan. 26.

The breakdown of the invoice from Toronto AV firm Bespoke Audio Visual is redacted, but it shows the total billable amount, as well as the date and venue, which is the finance minister’s regional office in downtown Toronto.

Freeland’s public itinerary, as well as a version circulated internally in the Access to Information documents, shows only two events that day – the World Economic Forum panel and a virtual roundtable for the Atlantic Chamber of Commerce.

The World Economic Forum panel, which was on Stakeholder Capitalism, was conducted by Zoom. A Jan. 21 email from someone in Freeland’s office said she would be “using a laptop, nothing fancy, but will have a webcam/microphone for better quality.”

The email also said Freeland would likely have “no support staff with her. In other words, simple is best!”

Despite this initial plan, Freeland instead used her Toronto office and rented audio-visual equipment for the World Economic Forum panel and the Atlantic Chamber of Commerce roundtable, sitting in a room adorned with several Canadian flags.

Freeland attended Question Period virtually on Jan. 26 in between the two meetings, though it appears she did so through a simple computer set-up with a headset.

While the dollar value might not rank high as far as government expenses are concerned, it seems like an unnecessary cost, Canadian Taxpayers Federation federal director Franco Terrazzano told True North.

“Why are a few Zoom meetings costing us more than $5,000?” Terrazzano asked. “I don’t know too many Canadians that spend thousands of dollars for a couple of Zoom meetings. Freeland is our finance minister so she knows how broke the feds are. We need to see better leadership from her on saving money.”

The Department of Finance did not respond to a request for comment.