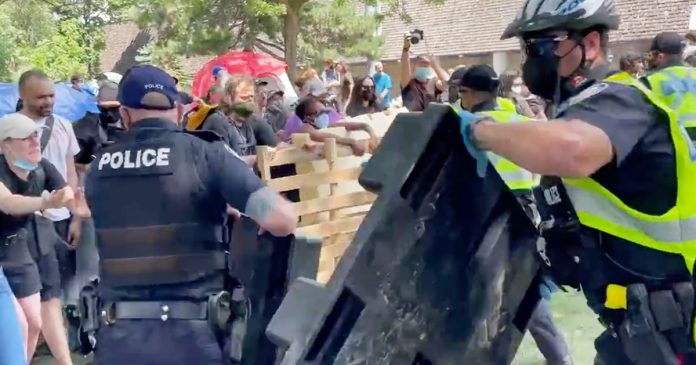 “There is absolutely no need for batons, pepper spray or even guns, not when the work should be done by the City’s Streets to Home staff and other outreach workers,” the letter reads.

The letter comes days after the city finally dismantled an illegal encampment at Alexandra Park and Lamport stadium, resulting in violent clashes between activists and police.

At Lamport staidum, hundreds of protesters — most of whom are not homeless and do not live in the encampment — showed up to stop the tent city from being cleared.

Many of the activists blocking the police belonged to the Encampment Support Network, a volunteer network that supports residents of the illegal encampments.

Footage from the scenes at Lamport show the protesters actively blocking police from clearing the tents and refusing to obey commands.

Twenty-six people were arrested at Lamport Stadium. Seven of them are facing criminal charges while the rest were charged under the Trespass to Property Act.

Police said three officers were injured while clearing the encampment, and that objects were thrown and an unknown substance was sprayed at officers.

The City of Toronto has provided hotels and other forms of shelter to the residents of the illegal encampments, however many of them prefer to live in the encampments instead citing the fear from random check-ins.

It is anticipated that the illegal homeless encampment at Moss Park will be cleared in the coming days.