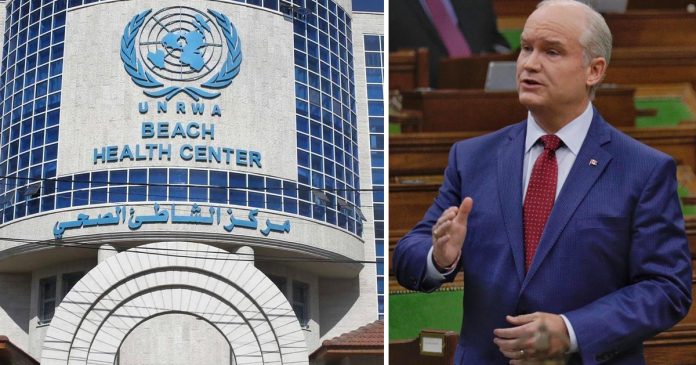 Conservative Party leader Erin O’Toole blasted the United Nations Relief and Works Agency (UNRWA) as “appalling” following a report by UN Watch which claimed that over 100 officials with the organization promoted anti-Semitic content.

“This report is appalling. As Conservatives have been saying for months, UNRWA needs to address this recurring problem in their schools and remove employees who incite anti-Semitism and hate against Jews. This cannot be allowed to continue,” tweeted O’Toole on Wednesday.

UNRWA describes itself as a humanitarian organization that provides access to education, health care and other services for Palestinian refugees. The organization has faced repeat accusations of anti-Semitism in the past with regard to its educational curriculum.

According to UN Watch’s report which is titled Beyond the Textbooks, the NGO discovered 113 “instances of incitement” against Jews by teachers and staff, some of which celebrate and promote anti-Semitic violence.

Among some of the most egregious examples of Jew-hatred by UNRWA include a Gaza math teacher Nahed Sharawi “who shared a video of Adolf Hitler with inspirational quotes to “enrich and enlighten your thoughts and minds.”

Another UNRWA West Bank teacher posted anti-Semitic conspiracies which depicted “that Jews control the world, created the coronavirus and seek to destroy Islam.”

According to official UNRWA policy, the organization has a zero-tolerance for racism and discrimination.

“Around the world, educators who incite hate and violence are removed, yet UNRWA, despite proclaiming zero tolerance for incitement, knowingly and systematically employs purveyors of terror and anti-Jewish hate,”  UN Watch director Hillel Neuer said in a statement on the report.

“We call on the governments that fund UNWRA to take action to stop the vicious cycle of generations being taught to hate and violently attack Jews.”

In 2018, US President Trump cut nearly $300 million in planned funding for UNRWA after finding the operation “irredeemably flawed.”

In comparison, over the past year, the Trudeau Liberals have committed upwards to $90 million to scandal-ridden organization.