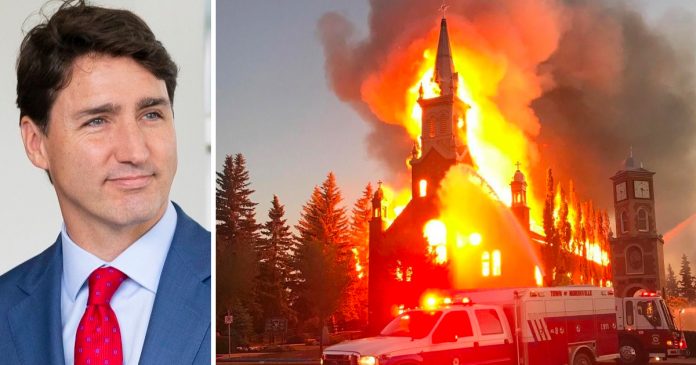 Ontarians are taking a stand against the chain of church burnings that has devastated communities across the country. Grassroots movement Civic Revival announced that they are holding an event in Mississauga this Saturday, August 7, to “Stop the Burning of Churches in Canada.”

“Vandalizing and burning places of worship have no place in Canada and must be condemned in no uncertain terms,” asserts Civic Revival. They are calling “upon the Trudeau government to publicly condemn such atrocities and to assume its responsibility of upholding the Charter Rights for all Canadians and of putting an end to such heinous attacks on churches.”

True North has been mapping the church attacks and has found that 57 Christian churches have been vandalized, burned down or desecrated since the June announcement of the discovery of apparent graves found near a residential school in BC.

While the majority of Canadians have condemned the attacks on places of worship, a number of activists, academics and prominent public figures have excused and even celebrated the church burnings and acts of vandalism.

In response to the church attacks, Trudeau said “it is real and it’s fully understandable, given the shameful history that we are all becoming more and more aware of and engaging ourselves to do better as Canadians.”

Echoing the prime minister’s remarks, former principal secretary to Trudeau, Gerald Butts, stated that the ongoing church burning “may be understandable” in response to a tweet by journalist Terry Glavin.

In response, Civic Revival has asked “concerned Canadians to rise up and ask for accountability from their government and for upholding the rule of law.”

“Not only did these attacks result in damage and destruction to ancient Catholic churches which were built some 100 and 200 years ago, but also churches that were built by more recently established immigrant communities,” wrote Civic Revival.

“One blatant example is St. George’s Coptic Orthodox Church in Surrey, British Columbia, which was burnt to the ground on Monday, July 19, 2021. Followers of the Coptic Orthodox church who emigrated to Canada from Egypt, in pursuit of the promise of equal rights, religious freedom, and the rule of law, were shocked to see their churches once again under attack.”