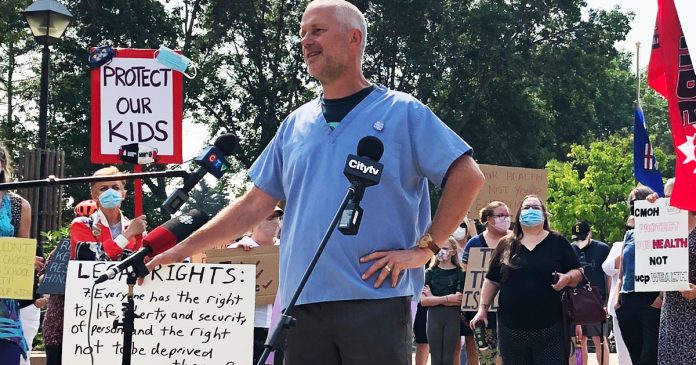 CBC has claimed that they were unaware that Calgary emergency physician Dr. Joe Vipond was an “NDP supporter” when quoting him as an expert source in numerous articles.

As exclusively reported by True North, Alberta elections finance data revealed that Dr. Vipond has donated nearly $20,000 to the Alberta NDP since 2014.

“In the spirit of full transparency, we didn’t know he was an NDP supporter. We talked to him as a well respected medical professional (for example in the mask opinion piece) and looked to him for that advice and expertise…which is strongly backed by other doctors,” Thompson told True North.

Dr. Vipond has been a vocal and regular critic of Alberta’s ruling UCP government. In one social media post dated July 28, 2021, Dr. Vipond tweeted about “taking to the streets and toppling” Jason Kenney’s government in response to the lifting of quarantine public health orders in the province.

Most recently, Dr. Vipond called for the resignation of Alberta’s Chief Medical Officer of Health Dr. Deena Hinshaw for her role in the decision to lift the orders and has led several pro-lockdown rallies.

He has also repeatedly denied any association with the Alberta NDP, claiming that he was an “independent practitioner with no ties to the NDP” and that accusing him of being an NDP activist could be “considered slander.”

True North reached out to Dr. Vipond for comment on whether he had disclosed any of his political donations to the media when asked for his expert opinion.

Dr. Vipond has been a go-to expert source by legacy media outlets like the CBC, Global News and CTV News. Despite records of his extensive contributions to the Alberta NDP being public, media outlets made no mention of his financial support for the party.

CBC News published several pieces in which Dr. Vipond was quoted as an expert and where he was only referred to as a “Calgary emergency doctor.”

One op-ed penned by Dr. Joe Vipond and two other physicians in support of masking included an author biography which only described him as “an emergency doctor and clinical associate professor at the University of Calgary.”

True North also reached out to Global News and CTV News for comment on whether Dr. Vipond’s donations to the Alberta NDP were ever disclosed but did not receive a response.