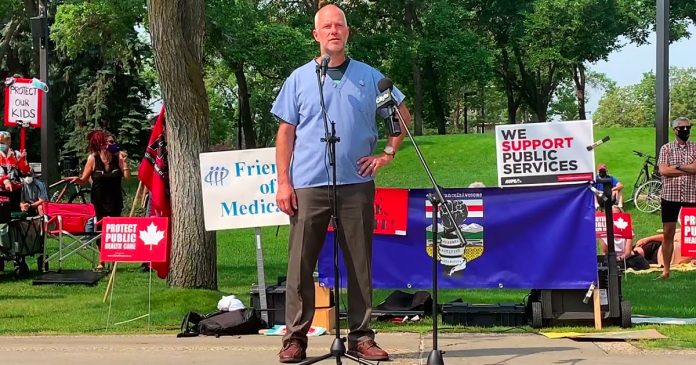 We are constantly told that we need to “trust the experts” when it comes to COVID-19. But what happens when those health experts turn out to be partisan politicians or political donors?

Dr. Joe Vipond of Calgary has been promoted as the voice of reason by much of the media. He is a frequent guest on television, often criticizing the Conservative government in Alberta and pushing for more extreme lockdown measures.

Last week, he joined the chorus of left-wing lockdown authoritarians by publicly condemning Alberta Chief Medical Officer Dr. Deena Hinshaw and demanding her resignation, simply because they disagree with her advice.

During a spirited interview on CTV, Vipond accused Premier Jason Kenney and Dr. Hinshaw of conducting an “incredible experiment to see how many people we can get sick, have long-term disability and possibly even die.”

He also helped promote pro-lockdown rallies in Calgary and Edmonton, called for protesters to “take to the streets” and “topple this government,” called for a “general strike” and finally, called for the Trudeau Liberals to intervene in Alberta and reimpose strict COVID-19 rules.

There is a lot of hypocrisy to unpack here. Vipond is undermining trust in public health, he’s calling for a strike among fellow health-care practitioners — which would presumably put lives at risk — and he’s encouraging people to congregate while also calling for strict measures to combat the Delta variant, which we’re told can spread outside.

Some on social media began to question whether Vipond was truly an independent practitioner, as he’s referred to by the media, or if perhaps he’s a partisan actor.

Dr. William Makis of Edmonton suggested that “Dr. Vipond is one of a dozen NDP activist doctors.” Vipond jumped in to insist he is not an activist.

“Reference for me being a NDP activist doctor plz? Thanks for that. Otherwise this might be considered slander,” he wrote on Twitter, later adding, “I am an independent practitioner with no ties to the NDP. If you have evidence to the contrary, feel free to produce it.”

My colleagues at True North went ahead and found some evidence to the contrary.

According to Alberta’s political contributions database, Joe Vipond of Calgary has donated nearly $20,000 to the NDP between 2014 and 2019. But surely it couldn’t be the same Joe Vipond. Surely he would have disclosed that before going on television, and he wouldn’t have been so adamant on social media that he has “no ties to the NDP.”

When True North asked for comment, Vipond confirmed that it was him making the donations while also maintaining that he has no ties to the NDP.

“I have no ties to the NDP other than past donations,” he wrote.

Only an “expert” could circle that square.

Why wouldn’t anyone in the news rooms that hosted him on air bother to do such a check before giving Vipond credibility and a huge platform to blast his alarmism and lockdown message across their airways?

Alberta is not the only province to see politics mix with public health experts.

As reported by my colleague Anthony Furey in the Sun, a doctor who was an advisor on the Ontario Science Table is running to become the Liberal candidate in the next provincial election.

Physician Dr. Nathan Stall is set to be the “star candidate” in the Toronto-St. Paul’s riding, according to Liberal insiders. Stall initially told the Sun that he would not step down from his position on the independent advisory board should he win and the Science Table was fine with that. Only after the news got out did he then announce he had reconsidered and was resigning from the post.

But Canadians should not accept politicians and political donors pretending to be neutral, apolitical experts — especially when we’re condescendingly told we must always “trust the experts.”

How can we trust “experts” when they moonlight as political activists?