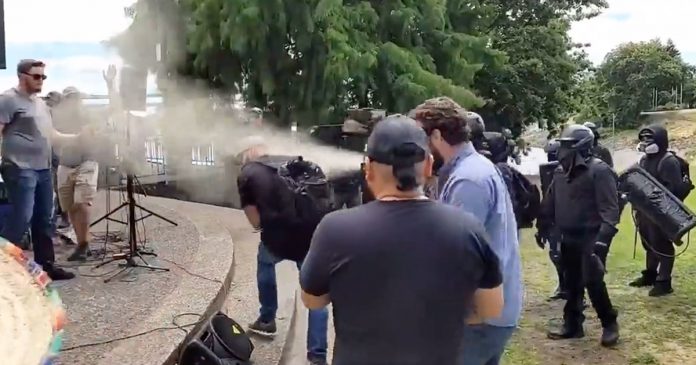 Police watched from the sidelines as dozens of Antifa agitators donning shields and hand weapons bear sprayed Christians and their kids. A female prayer event attendee described Antifa as “ruthless.”

Many videos documented the assaults: one showed an Antifa militant pepper spray a Christian event attendee who stepped away in an attempt to decelerate the situation and dodge the assault, as reported by The Post Millennial.

One Antifa militant awaited Pawloski’s arrival, tweeting, “Welcome to Portland. You won’t like it here, pastor.” Pawloski was maced in the face by Antifa at the event.

The Calgarian Cave of Adullam congregation pastor rose to prominence in Canada for championing religious freedom and criticizing law enforcement’s draconian COVID-19 regulations. A video of Pawloski kicking Calgary police out of his church over Easter went viral.

Pawloski compared government-mandated church closures during the pandemic to the measures taken by authorities in his native country Poland when it was under the Communist regime. Pawlowski was arrested in May for violating public health orders by holding an in-person church service. Pawlsoki has also been issued dozens of COVID-19 related tickets for feeding the homeless without wearing a mask.

In June, Pawlowski was found guilty of contempt of court. Sentencing arguments have been delayed until September, but Alberta Health Services has indicated it will be seeking 21 days of jail time for the pastor.

Pawlowski has been touring the United States sharing his experiences.