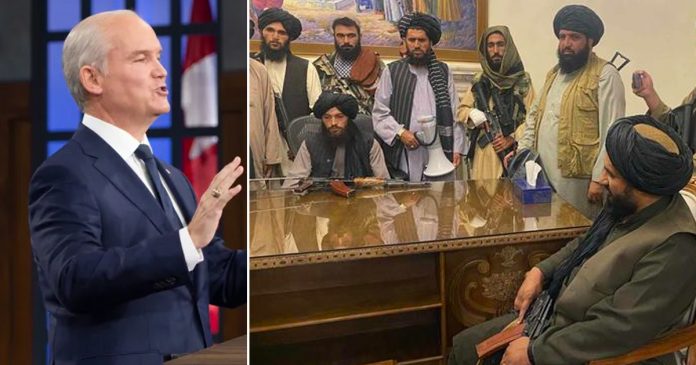 In stark contrast to the governing Liberals, the Conservatives say if they form government, they will refuse to recognize the Taliban as the legitimate government of Afghanistan.

Conservative Leader Erin O’Toole released a statement shortly after Liberal Foreign Affairs Minister Marc Garneau told CBC’s Power & Politics that the government will “wait and see” how the Taliban behaves before making such a determination.

“The use of force by the Taliban is completely unacceptable and that’s why today I’m announcing that a Conservative government will not recognize the Taliban as the legitimate government of Afghanistan,” O’Toole said.

O’Toole also said that a Conservative government will ensure aid provided to the Afghan people does not end up in the Taliban’s hands.

“The situation in Afghanistan is devastating and Justin Trudeau has to answer for why he abandoned these people,” O’Toole’s statement read.

Over the last week, the Taliban has effectively been able to steamroll through Afghanistan, ultimately capturing the nation’s capital, Kabul, over the weekend as the remaining US troops withdraw from the country.

The quick takeover by the terrorist forces has led to several countries, including Canada, scrambling to evacuate citizens and any diplomatic staff remaining in the country.

Prime Minister Justin Trudeau told reporters Monday that the government was ready to resettle thousands of Afghans “in the coming weeks.”

Since 2013, the Taliban has been on Canada’s list of terrorist organizations, with Public Safety Canada noting its use of “terrorist tactics, including the extensive use of Improvised Explosive Devices and suicide attacks, to further its political objectives.”