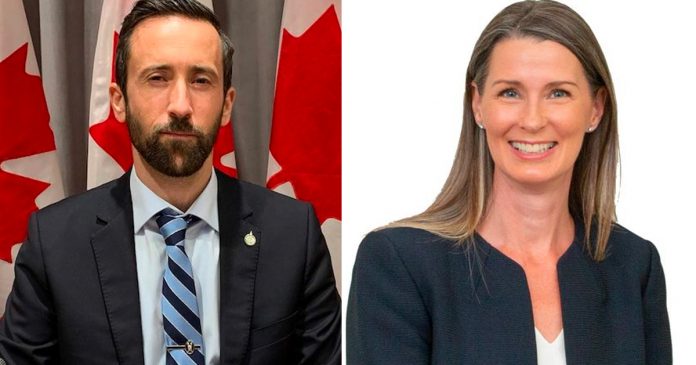 An Alberta People’s Party of Canada candidate is telling Derek Sloan to go home to Ontario as he announces his independent campaign.

“Derek Sloan is an opportunistic Ottawa politician that sees Albertans as nothing more than a ticket, an opportunity for him to advance his own career,” Banff—Airdrie PPC candidate Nadine Wellwood said Thursday.

Wellwood’s statement was released in response to Sloan’s announcement of his decision to run as an independent in the Sept. 20 federal election. Wellwood accused the MP for Hastings—Lennox and Addington of leaving Ontario and coming to her riding of Banff—Airdrie to “steal” a seat from an Albertan.

Sloan is campaigning under the “make Alberta great again” slogan, but Wellwood says, “Albertans do not want or need another Ottawa politician to ‘save us.’  Albertans want and deserve an actual Albertan to be their voice, their representative in Ottawa.”

Before deciding to run as an independent, Sloan stated he was forming his own federal party in July. At the time, PPC Spokesperson Martin Masse told True North he didn’t think it was necessary for Sloan to run on his own since he seems to agree with most of the PPC platform. PPC leader Maxime Bernier even made several overtures to Sloan to join the PPC and was disappointed that he declined.

“If Derek Sloan wanted to help Alberta, he would have thrown his support behind an Alberta candidate and shown some real leadership,” said Wellwood. “Instead, he has chosen to be selfish and in doing so displayed his own weakness as a leader.”

The Banff—Airdrie riding is currently held by Conservative whip Blake Richards, who is seeking his fifth term. At a campaign event in Cochrane on Thursday, Sloan briefly discussed his decision not to join the PPC or Western separatist Maverick Party:

“God bless both of those parties. But let us have this slice of the pie because we’ve done our homework,” Sloan said. “It’s going to be Blake or me. The NDP or Liberals cannot win. There’s no way. There’s no way.”

Although Sloan’s campaign events have drawn plenty of supporters, it seems very optimistic for Sloan to assume that as a newcomer to Alberta, he would instantly out-perform the Maverick, PPC and Liberals and go head-to-head with Blake.

Sloan rose to prominence during the 2020 Conservative Party of Canada leadership race. In January 2021, the Conservative caucus voted to remove him, citing a “pattern of destructive behaviour.”

Conservative leader Erin O’Toole said he would not permit Sloan to run again after it was revealed that Sloan’s leadership campaign received a $131 donation from notorious Canadian white supremacist Paul Fromm.

Sloan has a difficult task ahead of him. Since 1974, only five independent MPs have been re-elected after exiting our being ousted from party caucuses.

True North reached out to Sloan for comment but did not hear back by the time this article was published.