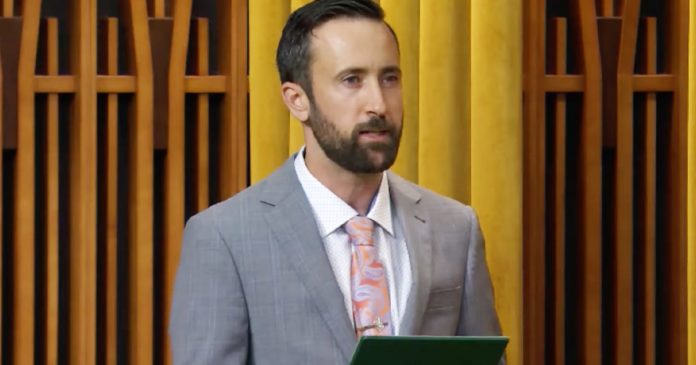 At a rally in Southern Alberta on July 25, Ontario MP Derek Sloan announced he was starting a new political party. While he has yet to reveal the name, Sloan says the party will be the “greatest patriotic movement Canada has ever seen.”

Sloan has been a vocal opponent of government lockdowns and strict public health measures. The MP for Hastings—Lennox and Addington was one of the first politicians to join the End the Lockdown Caucus, a non-partisan organization calling for an end to lockdowns, which they claim violates Canadians’ fundamental Charter rights.

Sloan rose to prominence during the 2020 Conservative Party of Canada (CPC) Leadership Race. In January 2021, the Conservative caucus voted to remove him, citing a “pattern of destructive behaviour.” Current CPC leader Erin O’Toole said he would not permit Sloan to run again after it was revealed that Sloan’s leadership campaign received a $131 donation from notorious Canadian white supremacist Paul Fromm.

Sloan has since denied that he had knowledge of the donation, citing the fact that his campaign raised well over $1.3 million.

The announcement of Sloan’s new party caught many Canadians by surprise, with many expecting Sloan to join Maxime Bernier’s People’s Party of Canada (PPC) — which was formed in 2018 after Bernier lost the Conservative Leadership race.

The PPC caters to a number of Conservative voters who are critical of the CPC. Bernier has traditionally focused on economic issues such as challenging the power of the dairy lobby. In the 2019 federal election, the PPC garnered 1.6% of the popular vote nationwide. It is unclear how Sloan’s new party will differentiate from the PPC, but Sloan has received significant support from pro-life voters due to his socially conservative views.

“Mr. Bernier made several overtures to Mr. Sloan to join the PPC and we are disappointed that he declined and decided to launch his own party. We don’t really understand why he believes this was necessary, given that he seems to agree with most of our platform,” PPC spokesperson Martin Masse told True North.

“We wish him good luck but he has decided to become a competitor instead of joining us, and there won’t be any collaboration between us.”

True North reached out to Alberta independence activist and former politician Cory Morgan to ask him whether Sloan’s new party will be successful and if there is a future for another right-of-centre party in Canada.

“The few that have grown into major players began with a dedicated niche as all parties do. They consolidate their support there and then begin compromising in order to broaden their support,” Morgan said.

“Eventually, they merge and become what they were formed to fight in the first place. We saw it with the Reform Party federally and the Wildrose Party provincially. Generations ago, it was the federal Progressives. It is a cycle and is more a sign of a broken system than anything else.“

Morgan argues that conservatives are unlike the Liberals, who are not bound by any particular ideology.

“Conservatives…constantly try to find pillars of support from issues and ideologically focused groups which work in the short-term but tend to splinter in the long term as the party waters down in trying to win elections.”