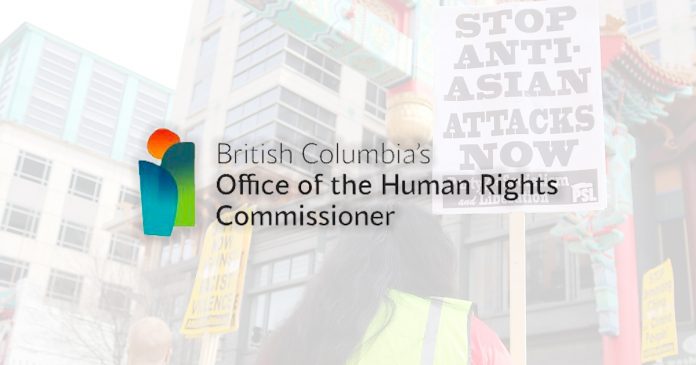 BC’s Office of the Human Rights Commissioner (BCOHRC) is launching a public inquiry into the “rise of hate during the pandemic” that will cost taxpayers over $200,000.

According to the BCOHRC, the public inquiry will span two fiscal years, with approximately $200,000 allocated for the first year. No cost estimate was provided for the second year, and costs could rise when pandemic measures lift and in-person consultations can occur.

The BCOHRC website notes “A public inquiry is an official review of major events or issues to establish facts and make recommendations for change… An inquiry is not a court of law and cannot make legal findings of guilt or liability or compel governments to accept inquiry recommendations.”

The public inquiry is being launched based on the assertion that “white supremacy” and “hate” have been significantly on the rise in BC since early 2020.

The BCHRO is also relying on data from a report released by the Chinese Canadian National Council, Toronto Chapter. According to the report, 1150 anti-Asian hate incidents occurred across Canada between March 10, 2020 and February 28, 2021, and 506 of those incidents occurred in BC.

Among the hate incidents included in the report are a situation where an Asian woman’s colleague asked her if she was eating a bat, and an encounter where two panhandlers asked an Asian man for money and then lunged at him and told him Chinese people brought over COVID-19 when he didn’t give them any cash.

Late last year, the BCHRO ran a $70,000 “Am I racist?” bus stop ad campaign that featured phrases such as “If I say I don’t see skin colour, am I racist?” and “If I want to forget our province’s history, am I racist?”

The Office has an annual approved operating budget of $5.5 million, with Human Rights Commissioner Kasari Govender receiving a $300,000 salary.

Recap of Day 3 of the Truckers for Freedom Convoy across...

Conservative MPs speak out in support of Truckers for Freedom Convoy