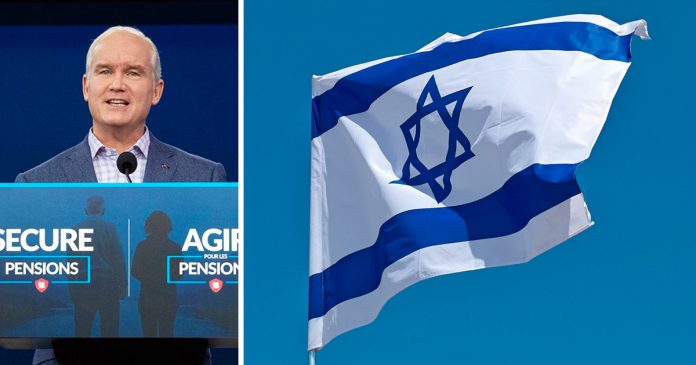 Conservative leader Erin O’Toole reaffirmed his pledge to move Canada’s embassy in Israel to Jerusalem if elected, even facing the high likelihood of pushback from anti-Israel critics in the international community.

O’Toole’s platform is unequivocal about a potential Conservative government’s support for Israel.

“Canada’s Conservatives will always support Israel’s existence as a sovereign democratic Jewish state with the right to self-determination and to live in peace and security,” it says, vowing to “recognize Jerusalem as the capital of Israel and move the Canadian embassy to Jerusalem.”

The platform also says Canada will return to its “longstanding policy of not singling out Israel for criticism at the United Nations and international fora.”

What’s unclear is how an O’Toole government would navigate the anti-Israel forces in the United Nations.

The US government’s move of its embassy in Israel to Jerusalem in 2018 faced significant condemnation from many anti-Israel voices  and global institutions.

The United Nations General Assembly voted 128-9 in favour of a resolution expressing “deep regret” about the US recognition of Jerusalem as Israel’s capital, and calling for the move to be reversed.

Canada was among 35 countries who abstained from the vote. Only nine countries – including the United States and Israel, voted against the resolution.

A similar draft resolution before the United Nations Security Council was supported by 14 of its 15 member states, though it was vetoed by the United States.

While many in the media predicted significant unrest and conflict over the United States’ decision to acknowledge Israel’s capital, the reaction in the Middle East was minimal.

O’Toole was asked at a campaign stop Thursday if he’s prepared to handle negative reaction if elected and serving as a new prime minister on the world stage.

“Yes,” he said. “This was a commitment I made several years ago. Israel is a close ally of Canada, a friend, a democracy in a place in the world that needs more democracy. And we will move our embassy and respect the capital being established in Jerusalem.”

O’Toole said such a move would not change Canada’s longstanding policy of pursuing a two-state solution between Israel and the Palestinians. He also suggested it would show “leadership” that Canada’s been lacking on the world stage during Trudeau’s tenure in power.

“It’s important for Canada to once again emerge on the world stage as a country that will stand by our values, that will be a defender of human rights, and will commit to a strong, principle-based foreign policy,” O’Toole said.