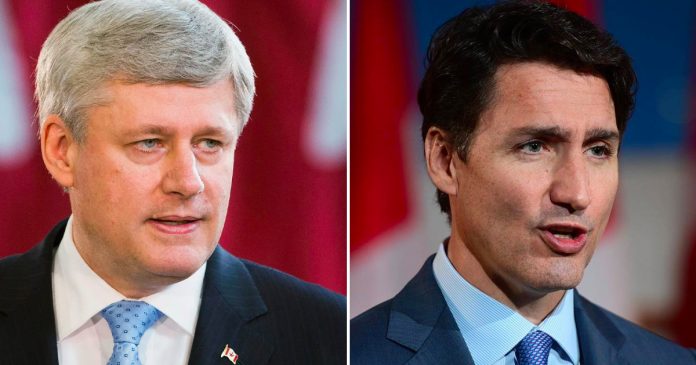 Trudeau made the statement in response to a question on his pandemic performance and falsely claimed that Conservative Party Leader Erin O’Toole wanted to create a “two-tier” healthcare system.

“The idea of… going back to greenhouse gas emissions… the idea of going back to Mr. Harper, even when we transcended that with other measures, it makes no sense. To go back with a two-tier healthcare system as has been proposed by Mr. O’Toole would be ridiculous,” Trudeau said in French.

The social media platform Twitter immediately flagged Freeland’s video shortly after it was posted and tagged it with a “manipulated media” disclaimer. Despite full versions of the video emerging online showing that a crucial part of the interview was edited, Trudeau maintained that the Liberals had posted it “in its entirety.”

This is the third time in about a week that Trudeau has blamed the Harper government with regard to various issues.

Just yesterday, Trudeau made a similar comparison while in Granby, Quebec.

“Today’s economy, tomorrow’s economy needs us to fight climate change. Canada lost 10 years under the Conservative Party who wants to go back to the old Harper years objectives and goals. Some young people who are voting for the first time and who just do not remember the Harper era. Well, since 2015 we have been working hard to catch up but we cannot waste any minutes especially over the next four years,” said Trudeau.

Prior to that incident, Trudeau also resorted to referencing Harper’s handling of the 2015 Syrian refugee crisis when asked by a reporter whether his government effectively handled the Afghanistan evacuations.