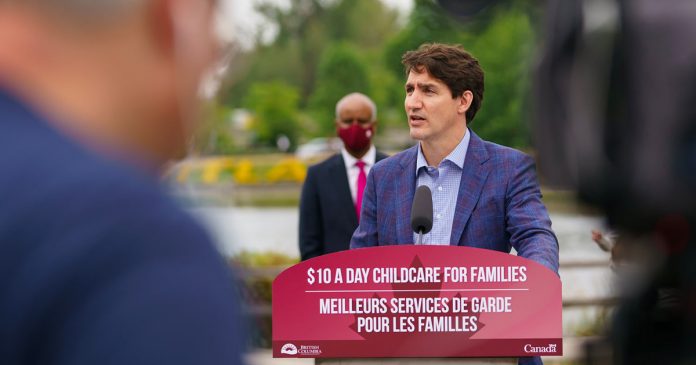 Liberal Party Leader Justin Trudeau and his peers have slung a wide array of insults and divisive remarks towards Canadians over the years.

From calling people “neanderthals,” to alleging that Canadians were racist and implying veterans were too greedy, the Liberals have smeared ordinary people in numerous ways.

True North has compiled a list of the eight worst insults and remarks that the Liberals have used against Canadians.

Referring to unvaccinated Canadians as “those people”

During a campaign stop in August, Liberal Party Leader Justin Trudeau referenced unvaccinated Canadians as “those people” and suggested that they are putting everyone at risk, including children. Currently, approximately 28% of the Canadian population has yet to receive one dose of the COVID-19 vaccine.

“Everyone needs to get vaccinated and those people are putting us all at risk,” said Trudeau.

“And Erin O’Toole is siding with them? Instead of with Canadians who did their part and stepped up.”

Spending $3.3 million to lecture Canadians about how they’re racist

Prior to the 2021 election being called, the Liberal government announced a $3.3 million national ad campaign to lecture “non-racialized Canadian middle-aged adults” on how Canada is racist.

The government hopes to target alleged “racism hotspots” such as Thunder Bay and Hamilton with the program.

During an exchange in the House of Commons Finance Committee in 2018, former Liberal finance minister Bill Morneau called people “neanderthals” when being questioned about the government’s budget at the time.

“Aren’t you just buying votes, minister? Isn’t this what this whole budget is about? It’s a cynical political gesture, that you are saying these words because you do not, at all, emulate, or try to foster any of the things that you talk about in your budget either in your past corporate life, in your own department or even in your own ministerial staff,” asked former Conservative MP Lisa Reitt.

“We’ll continue to do this. If people like you don’t buy into it, that’s a problem that we’ll have to face. But my view is that we will be more successful collectively if we’re actually able to successfully promote women into leadership roles. We will drag along the neanderthals who do not agree with that, and that will be our continuing approach,” responded Morneau.

Saying law-abiding gun owners in the firearms lobby were “extremist”

In response, the Canadian Coalition for Firearm Rights slammed Blair for slandering hard working Canadians who make up the gun lobby including parents, teachers, lawyers and others.

While fielding questions from former Conservative Party leader Andrew Scheer on the Liberal government’s plan to handle returning ISIS fighters, Trudeau implied it was Islamophobic to worry about the security threats they posed.

“The Prime Minister is using a broad spectrum that includes poetry and podcasts, and all kinds of counselling and group hug sessions,” said Scheer. “When will the Prime Minister take the security of Canadians seriously and look for ways to put these ISIS fighters in jail?” asked Scheer.

Thanking Indigenous protestor for their donation as they were dragged out

In 2018, Trudeau told a First Nations mercury poisoning protestor that he was thankful for her donation as she was being dragged out of a Liberal fundraiser in Toronto by security guards.

A video of the incident shows Trudeau telling her “Thank you for your donation” as the female protestor is hauled from the stage.

At the height of the 2015 Syrian refugee crisis, then Liberal immigratoin minister Ahmed Hussen said it was “not Canadian” to be concerned about the cost of housing asylum claimants in Toronto.

During a 2018 town hall meeting, Trudeau was questioned by former Canadian Armed Forces corporal Brock Blaszczyk on why his government continues to fight veterans in court while bringing former ISIS fighters back to Canada and awarding Omar Khadr several million dollars.

In response, Trudeau told Blaszcyk that veterans were asking too much of him.

“Why are we still fighting against certain veterans’ groups in court? Because they are asking for more than we are able to give right now,” said Trudeau.