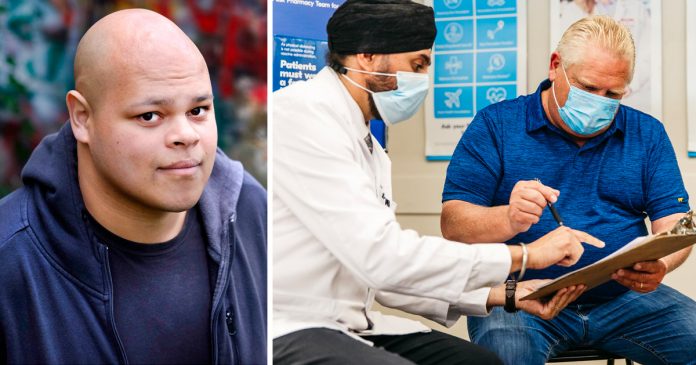 The Ontario Government’s Advocate for Community Opportunities Jamil Jivani voiced his opposition to the government’s plan to implement vaccine passports.

“Today’s announcement does not change my views,” said Jivani in a tweet on Wednesday. “I continue to oppose vaccine passports & other measures that create a two-tiered society.”

Jivani said he will be working with community members to document how vaccine passports impact minority groups and people from all backgrounds.

In a previous tweet, Jivani says like many Canadians who oppose vaccine passports, he isn’t “anti-vaxx.” He believes vaccine passports will marginalize people who are already struggling to make ends meet.

“I agree with Ontario Premier Doug Ford’s comments on July 15, when he said vaccine passports will create a two-tiered, ‘split society.’ Provincial mandatory vaccine passports will further marginalize a significant number of Canadians who are already struggling in our economy,” Jivani tweeted on August 31st.

As first reported by True North, Statistics provided by Health Canada confirm that black and Indigenous Canadians experience the highest rates of vaccine hesitancy in Canada.

The Ontario government said in a press release on Wednesday that it will require people to be fully vaccinated and provide proof of their vaccine status to access certain businesses and settings starting Sept. 22.

Premier Doug Ford said in the press release that requiring proof of vaccination in certain settings will reduce risk and serve as an important step to encourage every eligible person to be vaccinated.

“Based on the latest evidence and best advice, COVID-19 vaccine certificates give us the best chance to slow the spread of this virus while helping us to avoid further lockdowns,” Ford said.

Ford appointed Jivani to serve as the advocate for community opportunities in 2019. Jivani works as the managing director of Road Home Research & Analysis, has written columns for the National Post and wrote the book “Why Young Men: The Dangerous Allure of Violent Movements and What We Can Do About It.”

Jivani and the Premier’s Office could not be reached for comment in time for publication.