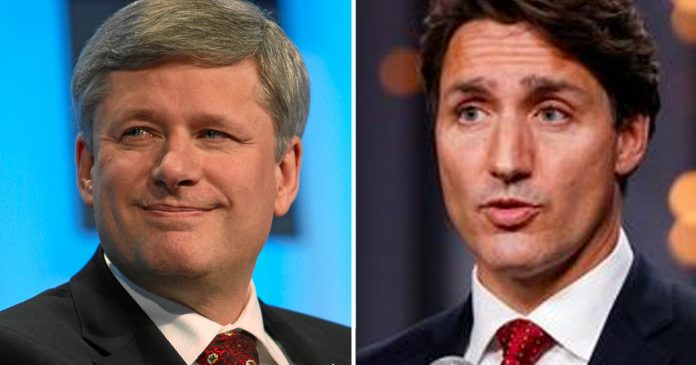 On three occasions, Trudeau blamed the Harper government for various issues including his government’s inability to free the two Michaels imprisoned in China, his failure to reduce carbon emissions and the Winnipeg National Microbiology Laboratory controversy.

Harper has not been in power since Trudeau was first-elected prime minister in 2015.

After being accused of letting the two Michaels down by Conservative Party Leader Erin O’Toole, Trudeau deflected by claiming Harper’s strategy on China was unsuccessful.

“If you want to get the Michaels home, you do not simply lob tomatoes across the Pacific, that is what Mr. Harper tried for a number of years and didn’t get anywhere,” said Trudeau.

When asked about the Liberal government’s poor performance on reducing pollution over the last six years by debate moderators, Trudeau lashed out at Harper who he accused of not believing in the fight against climate change.

“We inherited a government from a Conservative that did not believe in the fight against climate change and we had a lot of catching up to do but what we were able to do in 6 years was to bring a national price on pollution, ban single-use plastics, move forward in protecting more of our coasts, oceans and rivers than any government in history, ” said Trudeau.

Later on, while he was fielding questions from reporters, Trudeau also hinted that responsibility for his own failures lied with the former Conservative government.

In response to a question on why his government refused to disclose top secret files on the firing of two federal scientists at the National Microbiology Laboratory in Winnipeg believed to have shared classified information with China, Trudeau also suggested that he was dealt a bad hand by the Harper government.

“As a commitment we made in 2015, we moved forward something that the Conservatives had always resisted, oversight by parliamentarians over our national security agencies,” said Trudeau.

“And the National Security Committee of Parliamentarians actually works and we granted them full access to all of the highly secure documents.”

This is not the first time that Trudeau has evoked the memory of the Harper government to avoid answering simple questions.

While on the campaign trail, Trudeau referenced Harper on at least four different occasions ranging from topics on climate change, Afghanistan and the Liberal government’s inaction on lifting the gay blood ban.