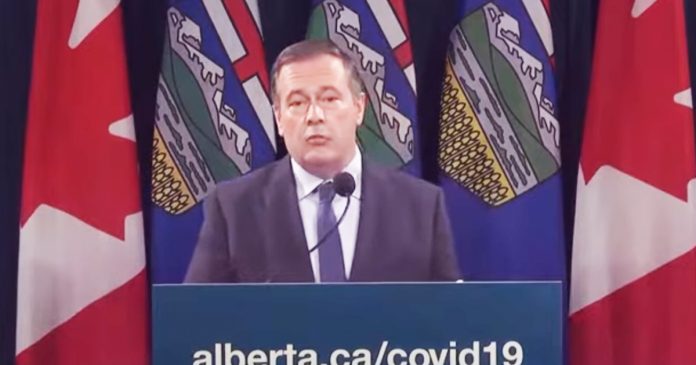 Alberta Premier Jason Kenney has reversed his long-standing objection to vaccine passports, announcing a proof-of-vaccination system for businesses while declaring a “state of public health emergency.”

At a Wednesday evening press conference, Kenney said a range of restrictions would be going into place after midnight, just a few hours later.

Health Minister Tyler Shandro said indoor social gatherings for unvaccinated Albertans are prohibited, while vaccinated households can gather with members of just one other household or two individuals who live alone.

A social distancing mandate will also go into effect, joining the province-wide mask mandate Alberta imposed last week. Employers will also be required to have all staff work from home, unless their in-person attendance is operationally essential.

As of Sept. 20, a ban on indoor dining will go into place, unless individual restaurants agree to adopt a vaccine passport program and allow only those who are vaccinated to be admitted.

Other restrictions include capacity limits on retail and entertainment venues.

The government is calling the vaccine program a “restrictions exemptions program,” in an attempt to present it as a choice available for businesses rather than a mandate.

The new restrictions impacting businesses will only be enforced if businesses refuse to adopt the province’s vaccine passport.

On July 12, Kenney told reporters at the Calgary Stampede that Alberta will not be implementing a vaccine passport system citing the fact that such a program would likely contravene several laws that protect medical freedom and the protection of private information in the province.

In his remarks Wednesday, Kenney apologized for insisting on remaining opening as COVID-19  cases in Alberta rose.

“It is now clear that we were wrong, and for that I apologize,” he said.

Kenney went on to defend his flip-flop by saying that he was only ever against vaccine passports because of privacy concerns.

Vaccine passports have been announced and in some cases are already in use in most other provinces.