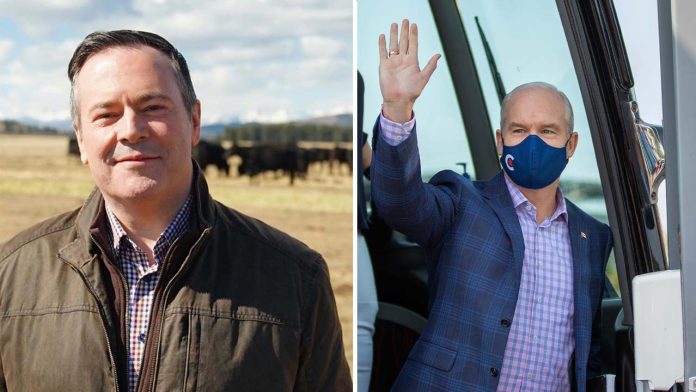 Speaking to reporters Tuesday evening in Calgary, Kenney pointed out that Stephen Harper’s decade in government, in which Kenney served as a cabinet minister, followed a loss in 2004.

“A party like the federal Conservatives should maintain stability,” Kenney said. “I was part of Prime MInister Harper’s Conservative party when he lost the 2004 election. Many people were disappointed. He went on to become prime minister and form a very effective government for the next decade.”

When asked Tuesday whether he supported O’Toole’s continued leadership of the Conservatives, Kenney said a revolving door of leaders undermines public confidence in the party.

“Constantly changing leaders doesn’t create a public confidence, and I think to be a leader, as Mr. O’Toole has tried to be, in the context of a pandemic is especially challenging to get your message out, to meet Canadians, to get to be known,” Kenney said. “I’m sure that Erin is going to work with his team to identify things that could have been done better in this campaign and the lead-up to it, to listen to grassroots party members. But I think the immediate instinct to remove a leader after a disappointing election outcome just creates constant instability.”

“We need a leader who is competent and principled,” Kenney said at the time. “A leader who won’t run away from conservative principles under pressure from the media or the Left.”

While the Conservatives slightly increased their share of the popular vote compared to 2019, they lost two seats overall.

O’Toole has faced criticism from within his party for running a centrist campaign and flip-flopping on key policies, despite his vaunted “true blue leadership” promise from last year. Last week, a Conservative national councillor launched a petition to recall O’Toole, accusing him of “betraying” the Conservative base.

An unsuccessful election campaign automatically triggers a leadership review under the Conservative constitution, but this isn’t set to take place until the next convention, which is scheduled for 2023. O’Toole’s critics have noted there could be another federal election before then.

In an email to supporters Tuesday afternoon, O’Toole expressed pride that “Canadians said no to a Liberal majority.”

“Thanks to Conservatives like you, we ran one of the best campaigns I’ve ever been a part of,” he said.

Kenney is facing a similar leadership challenge from within his party. Hours before his press conference, United Conservative Party MLA Angela Pitt said she no longer had confidence in Kenney’s leadership. This followed a similar condemnation from another UCP MLA, Leela Aheer, a week prior.