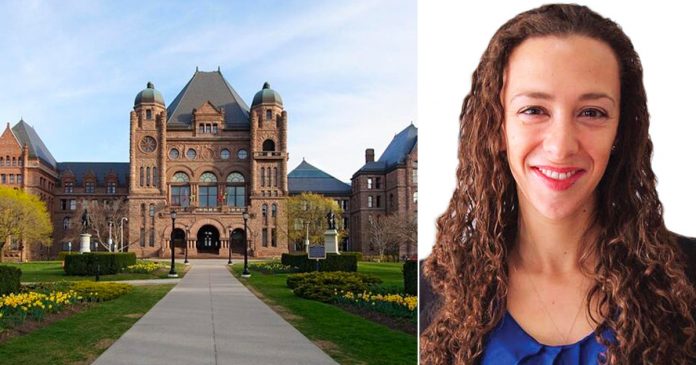 Cambridge Member of Provincial Parliament (MPP) Belinda Karahalios is speaking out about the Ontario government’s new rule requiring anyone entering Queen’s Park to show proof of COVID-19 vaccination or a negative test result.

The new rule is set to take effect on Monday and was mandated by Speaker of the Legislative Assembly Ted Arnott in September.

“This is a disgraceful and undemocratic ruling that sets a dangerous precedent,” the New Blue Party MPP said in a statement.

Karahalios says the new rule will prevent her and other elected officials who are either unvaccinated or do not wish to disclose their vaccination status from criticizing the government.

“It eliminates criticism of the ruling PC Party by blocking elected representatives from the legislature who agree with the New Blue Party principles,” Karahalios said.

The Cambridge MPP also questioned if the government would mandate vaccines during the next provincial election.

“Does the PC government plan on imposing these rules on the general public come election time?” Karahalios asked.

“If they think they can block elected representatives from entering the legislature, does that mean that unvaccinated people, or people who do not wish to disclose their vaccination status and refuse testing, won’t be allowed to vote in a general election?”

The speaker of the legislature told the CBC that they will “continue to seek to ensure that the Legislature is safe for all, and the privileges of Members to participate in the proceedings are upheld.”

Last year, Belinda and her husband Jim Karahalios announced the establishment of the New Blue Party as an alternative to Ontario’s governing PC party. The party opposes the Doug Ford government’s lockdown measures and promises to advocate for small business and freedom of worship

Belinda was ousted from the PC caucus after she voted against Bill 195, a bill that allowed the Ford government to unilaterally issue emergency orders for the next two years, effectively allowing for perpetual lockdowns without votes in the legislature.