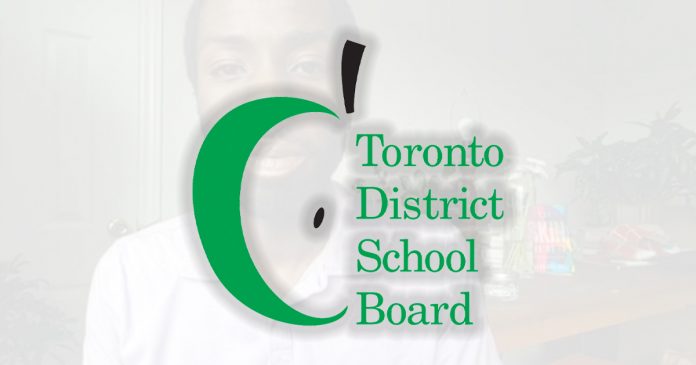 Despite an apology by education director Colleen Russell-Rawlins to concerned participants – mostly board principals – Cole was permitted to continue with his talks on Sept. 23 after the board brass was made aware of his hateful rhetoric during the first two talks on Sept. 20.

Board spokesperson Ryan Bird told True North that Cole delivered two sets of talks on what was supposed to be about anti-black racism during four separate sessions.

He said the cost per session was $4,000 and all sessions were primarily made up of principals and vice principals, but also some other staff.

Cole veered off script at the Sept. 20 session when he proceeded to speak in glowing terms about TDSB equity advisor Javier DaVila, who issued two virulently anti-Israel manuals to teachers during the height of the Gaza conflict in May.

The manuals proposed, among other things, that teachers read children’s books in which Israelis are depicted as thieves and murderers.

DaVila’s manuals also gave advice on how to teach children about the anti-Semitic Boycott, Divestment and Sanctions (BDS) movement.

The self-described “queer latine transformer” was placed on home assignment in May and subsequently reinstated without discipline in July.

Some attendees were taken aback when Cole addressed the “illegal occupation of Palestine territories” by the Jewish state.

“I can say Free Palestine … as many times as I want to because I am not an educator…there’s not much the people who invited me here can do,” he said in an angry, arrogant tone.

He continued to rail on defiantly about the “theft of land” and “settler colonialism” – berating those in attendance for “taking the side of the oppressor.”

The radical leftist also called me – the author of the DaVila stories in the Toronto Sun– “one of the most hateful columnists in the country.”

Despite his hateful diatribe, Cole was permitted to continue with the two Sept. 23 sessions at which he was captured berating superintendent Shirley Chan, after she bravely noted that several equate “Free Palestine” with the “destruction of Israel.”

In a statement, the Friends of Simon Wiesenthal Centre called Cole’s repeated calls to “Free Palestine” a dog whistle, noting the Free Palestine Movement is rooted in a long history of anti-Semitism, violence against Jews and promotion of the elimination of the Jewish state.

Not one trustee responded to the issue or called out Cole for his anti-Semitic tirade – including Jewish trustees Shelley Laskin and Alexandra Lulka.

Not one member of the legacy media covered the story, except for the Toronto Sun.

Efforts to reach Cole were unsuccessful. He has blocked me on Twitter and did not respond to interview requests made on other platforms.

But last week he busily posted tweets of support from a variety of like-minded Israel haters:

Russell-Rawlins, who returned to the TDSB as education director recently after a year at the troubled Peel District School Board, issued a weak apology on Sept. 23 – much of it a word salad – but only to the superintendents interrupted by Cole.

“It is clear that we should have done a better job providing space for staff to unpack these complex conversations and I want to apologize for the harm that may have caused,” she wrote.

The long-time public school board bureaucrat, known for her background in addressing issues of anti-black racism, anti-oppression and equity, made no apologies to the Jewish teachers or the Jewish community for allowing public funds to be used to attack Israel.

A board insider told me that teachers and principals are “terrified” of saying the wrong thing and are “overcompensating” with respect to anti-black racism.

The insider said there’s fear that Cole will use this experience to further push the “white male privilege” agenda at the TDSB.

Bird said there are no further sessions planned with Cole and that going forward there will be a “more formal approval process” for selecting speakers and the associated costs.