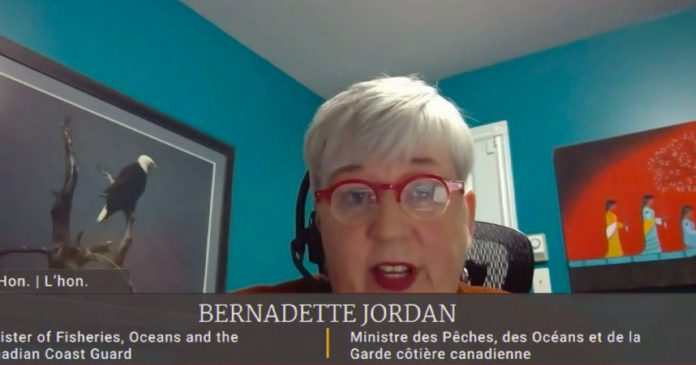 Former Liberal cabinet minister Bernadette Jordan has been fined under the Conflict of Interest Act for failing to report her personal finances.

Jordan, who held the position of fisheries minister, lost her seat during the 2021 election.

According to Blacklock’s Reporter, Jordan was fined after failing to file financial disclosures involving her Scotia Bank car loan and a Bank of Montreal mortgage.

The former minister was eventually required to pay a fine of $250 which was received by Ethics Commissioner Mario Dion.

During the election campaign, Conservative Party Leader Erin O’Toole promised in his platform that he would increase the maximum fine for ethics violations to $50,000 “with the fine to be proportionate to the severity of the offence and the offender’s history and personal net worth.”

Jordan is not the only Liberal to have their record marred by an ethics violation.

Repeat-offender Prime Minister Justin Trudeau has faced three investigations by the ethics commissioner, two of which resulted in fines and violations.

Most recently, Trudeau was investigated over his involvement in the WE Charity scandal which Dion ruled did not break ethics laws but did appear to have the makings of a conflict of interest. Additionally, former Liberal finance minister Bill Morneau was found to have violated ethics laws by giving “unfettered access” to his office to the organization.

Prior to that investigation, Trudeau was already fined for both the Aga Khan vacation where he failed to recuse himself from conversations in which there was a conflict of interest and for his involvement in the SNC-Lavalin controversy.

In August 2019, Trudeau was found guilty of attempting to politically interfere in former justice minister Jody Wilson-Raybould’s prosecution of SNC-Lavalin.

“I found that Mr. Trudeau used his position of authority over Ms. Wilson‑Raybould to seek to influence, both directly and indirectly, her decision on whether she should overrule the Director of Public Prosecutions’ decision not to invite SNC-Lavalin to enter into negotiations towards a remediation agreement,” wrote Dion in his judgement.