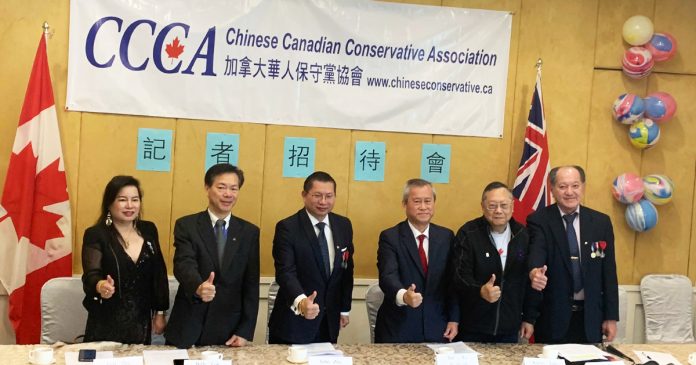 After an underwhelming performance by the Conservatives in Toronto and Vancouver in the last federal election, the Chinese-Canadian Conservative Association (CCCA) is calling on Conservative leader Erin O’Toole to resign as the leader of the party.

At a Toronto press conference Thursday morning, the CCCA accused O’Toole of becoming a “Liberal lookalike” and alienating Chinese voters with a tough-on-China message, resulting in the loss of ridings with large Chinese populations.

Chiu has said his campaign faced an online assault from forces possibly directed by China.

The CCCA put more blame on O’Toole’s campaign than China, however.

“Mr. O’Toole, your hatred message on China is dangerous as that would easily be translated into an ‘anti-Chinese’ message,” a statement from the CCCA said. “That message eventually made Chinese-Canadians pay the price, (due to) more anti-Asian incidents because of the same people that believe in your words.”

CCCA founder Joe Li failed to provide any examples of these “hatred messages” from O’Toole, when asked. Instead, he went on to say O’Toole wasn’t able to articulate any of the positive impacts Chinese-Canadians have on the country.

O’Toole’s platform said a Conservative government would stand with Chinese Canadians while standing up to the Chinese communist party.

“We must stand up to the Communist government of China,” the platform said. “Our quarrel is not with the people of China – part of an ancient civilization that has contributed much to humanity. We stand especially with Chinese Canadians whose contributions to Canada are immeasurable and who are enduring an appalling rise in anti-Asian hate and discrimination.”

The CCCA also took aim at O’Toole’s attempts to court Liberal and progressive voters at the expense of his party’s conservatism.

“As a grassroots conservative association, we believe Mr. O’Toole failed all conservatives by becoming a ‘Liberal look alike,’” the organization said.

“The CCCA is urging Mr. O’Toole to step down immediately to make room for the members [of the party] to choose a true Conservative leader who can lead us to victory in the next election.”

Li said his organization has the support of some Conservative caucus members, though he declined to name any of them.