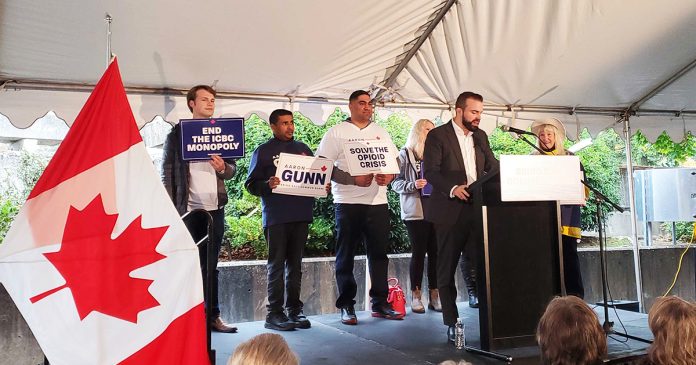 Conservative pundit and independent journalist Aaron Gunn has been barred by the BC Liberals’ Leadership Election Organizing Committee (LEOC) from running in its upcoming leadership race.

Gunn, who ran an explicitly conservative platform, responded to the news on Twitter Friday saying that those who believe in common sense and free speech are no longer welcome in the party.

“Today, it became clear that conservatives, and all British Columbians who believe in common sense and freedom of speech, are no longer welcome in today’s BC Liberal party,” tweeted Gunn.

‘I will be releasing a full statement later today, but rest assured, if you think this fight is over, you couldn’t be more wrong. The fight is only just beginning.”

In a statement released by the party, comments made by Gunn on social media were cited in the decision to bar him.

“After a thorough review of Mr. Gunn’s statements on social media, both public and private, and after having provided Mr. Gunn with the opportunity to respond to concerns raised by certain of those statements, LEOC concluded that to approve Mr. Gunn’s candidacy would be inconsistent with the BC Liberal Party’s commitment to reconciliation, diversity and acceptance of all British Columbians,” said LEOC Co-Chair Roxanne Helme.

Without Gunn in the race, party members will have to choose between the following candidates: Ellis Ross, Gavin Dew, Kevin Falcon, Michael Lee, Val Litwin and Renee Merrifield.

The move comes after Gunn was attacked by both the ruling BC NDPs and by potential opponent MLA Michael Lee who accused Gunn of holding allegedly “intolerant views.”

“Michael is exemplifying the worst aspects of politics. He is the classic politician who says one thing and does another, and people are sick of this behaviour,” Gunn told True North.

Gunn announced his leadership bid on October 9, 2021 in his hometown of Victoria, BC.