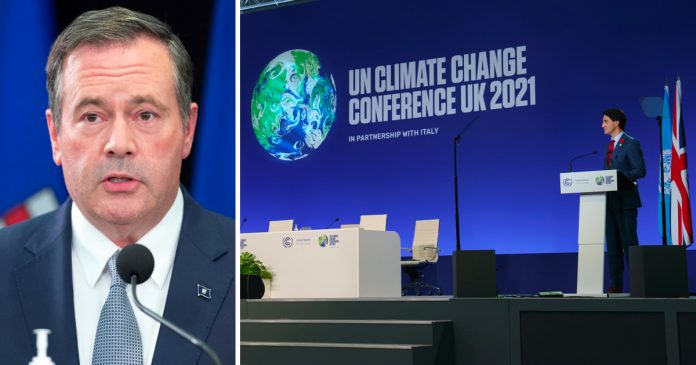 Alberta Premier Jason Kenney is hitting back after Prime Minister Justin Trudeau pledged to cap emissions in Canada’s oil and gas sector earlier this week while in Glasgow, Scotland for the COP26 summit.

Kenney stated that Trudeau’s commitments did not have the support of Alberta, which produces most of Canada’s energy.

According to the Canadian Press, Kenney told reporters that Trudeau’s pledge was “devastating” and “unrealistic.”

“Their approach seems to be, well it’s totally unrealistic, and their approach, if they were to actually achieve their targets without using these transition technologies, would be devastating to the entire global economy,” he continued.

On Monday, Trudeau stated that Canada would limit oil and gas emissions until they reach net zero by 2050.

“We will limit oil and gas sector emissions today and ensure they decrease tomorrow at the speed and scale needed to reach net zero by 2050,” Trudeau told global leaders.

“This is no small task for a major oil and gas producing country. This is a big step which is absolutely necessary.”

In response to Trudeau’s speech, Kenney stated that the government should work in concert with Alberta to develop resources for carbon-capture technology and other innovations like blue hydrogen.

Kenney also reiterated his pledge to work with the federal government on carbon-reduction initiatives but not to go along with any policy aimed at suppressing Alberta oil development.

Last year, Department of Environment government data showed that in 2018 – a year after the carbon tax was implemented – emissions in Canada actually grew by 15 million tonnes.