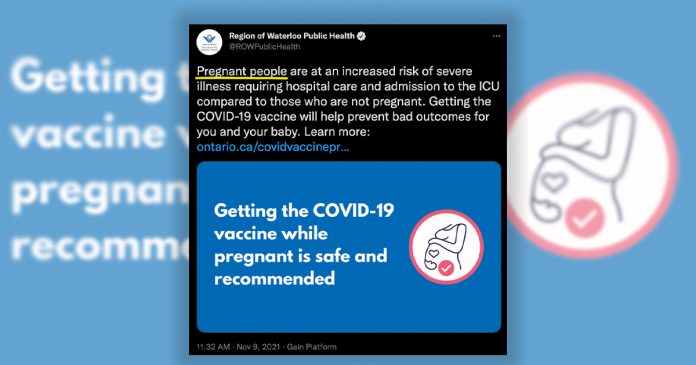 The term “pregnant people” has been criticized as an attempt to erase the biological reality women around the world face.

The term has been popularized by trans activists, which they claim is a so-called “inclusive” term for transgendered individuals.

In reality, people who transition from male to female are not biologically capable of giving birth.

On social media, a number of voices criticized the terminology for ignoring the realities women face.

This is not the first time that public health officials in Canada have referred to women as “pregnant people.”

"I am pregnant people. Hear me roar!" https://t.co/qRjmLJV92k

“Pregnant people and children under 5 are at higher risk of complications from the (flu). Keep everyone safe. Get the (flu shot). Check for vaccine availability near you,” tweeted Tam.

“As of April 23, all pregnant individuals can register for #COVID19 vaccination appointments under the “highest risk” health conditions in Phase Two of the province’s vaccine rollout,” tweeted Ontario Health Minister Christine Elliott.