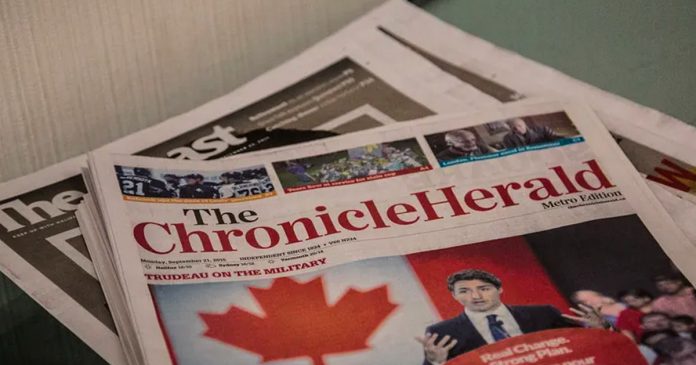 The Halifax Chronicle Herald took taxpayer-funded media rebates but then ended up firing its employees.

According to Blacklock’s Reporter, the media outlet, which is part of the company Saltwire Network Inc., fired 111 employees on September 1, 2020.

In the same year, the company received an undisclosed amount of taxpayer COVID-19 funding and was also benefiting from payroll rebates passed by the Liberal government in 2019.

Under the rebate program, the company could have received up to $13,750 per employee.

Court records show that six former employees pursued legal action with regard to their dismissal.

According to Justice Coady, those fied “range in age from 50 to 58 years” and had decades of service for the company.

In a separate court case, one SaltWire employee was awarded $88,000 in damages because of this termination.

“Jerry Slater lost his job with the Herald after a career of almost four decades through no fault of his own. There is dignity in work,” wrote Justice Jamie Campbell.

Lawyers representing the paper argued that the company “owed him nothing at all.”

When the Liberal government passed the legislation to subsidize government-approved outlets, then Heritage Minister Pablo Rodriguez called the loss of even one job a “tragedy.”

To date, numerous legacy outlets have applied for taxpayer funding including FP Newspapers Inc which owns several publications including the Winnipeg Free Press.

As of May, the company received $6.2 million in taxpayer funds, a majority of which were in COVID-19 subsidies and payroll rebates. Federal grants made up 54% of the company’s revenues this year.