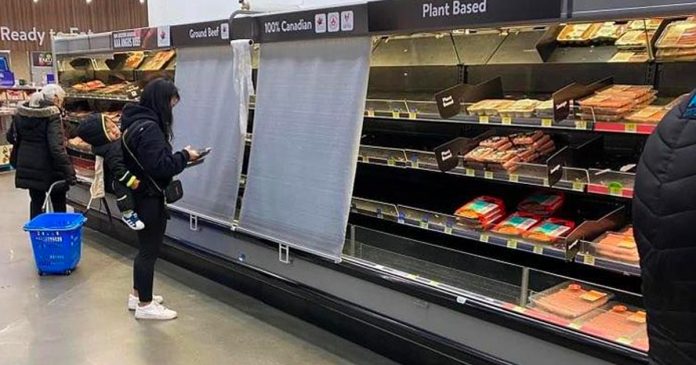 British Columbians are reporting empty grocery shelves as recent flooding and weather events have put a strain on the province’s supply chain.

Businesses and distributors have been forced to alter their transportation routes to deal with significant highways and roads being completely cut off for motorists, including the Coquihalla Highway.

“There’s one grocer that supplies most of British Columbia from Calgary. So they won’t be having problems getting stuff to the Interior, but they’d have to send any trucks headed for Vancouver Island through Washington State,” the Retail Council of Canada’s Director of government relations Greg Wilson told the Globe and Mail.

“Yes, we have routes that are challenged, but you know what? There are large areas of the province where those routes are not compromised and supplies are going to get through,” said Farnworth.

“One thing you would hope we’d have learned a lesson in the beginning of the pandemic, but I don’t think we did – panic-buying wasn’t helpful and it also wasn’t necessary. You don’t need a year’s worth of toilet paper.”

This week, heavy rains and flooding caused the city of Merritt to be evacuated by emergency crews, while places like Abbotsford have seen extensive flooding in the Sumas Prairie forcing many to abandon their homes or farms.

Provincial emergency services have begun to deliver meals and supplies to those stranded in remote areas.

“Please do not hoard items. What you need, your neighbours need as well,” said BC Premier John Horgan.

Canadians hoping to help the relief efforts can donate to a number of charities or fundraisers directly for cities and families impacted by the flooding.