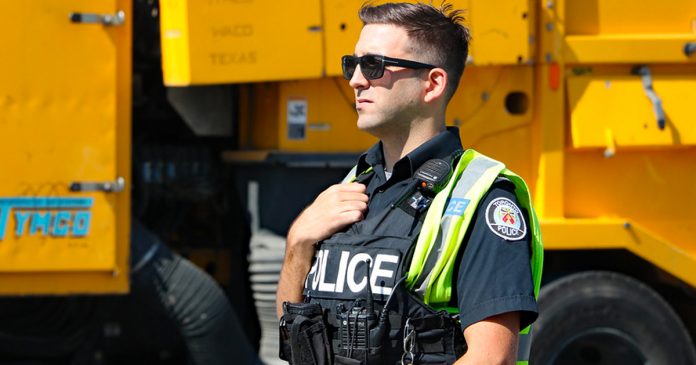 Toronto police officers are still getting sick with COVID even though the service suspended unvaccinated personnel over two weeks ago.

The Toronto Sun reported Saturday that outbreaks had occurred at Traffic Services and 11 Division of the Toronto Police Service (TPS).

True North reached out to both the TPS and Toronto Public Health (TPH) on Tuesday to find out if these numbers had increased. The TPS referred the question to TPH, and the TPH referred it back to the TPS. Neither provided an answer by the time of publication.

Police spokesperson Connie Osborne originally confirmed the cases on Saturday, saying that the service “moved quickly as possible to support our members and have measures in place to prevent further spread,” including requiring “all members of TPS to self-screen for symptoms or possible exposure before reporting for duty.”

Even though these measures are being characterized as new, True North has learned they are the same ones the TPS was using before making vaccination a requirement for duty.

Osborne confirmed in a statement to True North that “self screening was in place before the mandatory vaccination policy and continues to be.”

Asked whether there are any new measures or steps in place to prevent COVID-19, Osborne replied, “our measures remain the same and we continue to follow Public Health guidelines.”

True North also asked how it was that the TPS was experiencing these outbreaks with a reported vaccination rate of 98%. Osborne repeated the mantra that “public health officials…have stated that vaccination against COVID-19 is the most effective way to protect our workplaces and the public from the risks of the virus.”

When asked whether there have been any new COVID cases in the TPS since Saturday, Osborne twice referred inquiries to Toronto Health.

Toronto Health spokesperson Keisha Mair referred True North back to Toronto Police, claiming “they are best able to address (the) query as it pertains to their operational practices, possible case counts, and workplace vaccination policy. They should be in touch…”

Over 200 TPS members continue to be out of work after being put on unpaid leave for failing to show proof of vaccination on Nov. 30.

On Dec. 6, around 100 of these suspended officers held a sit-in protest outside the office of their union, the Toronto Police Association (TPA).

The TPA offered no comment on the sit-in or the latest COVID outbreaks.

Last week, the Vancouver Police Department followed the Calgary Police Service in announcing that it would allow rapid testing as an alternative to mandatory vaccination. Some unvaccinated TPS members have asked why this could not be a possibility in Toronto, especially if vaccinated officers are still being infected.

According to the TPS recruiting page, rapid tests are still being accepted from applicants. Full vaccination is required “when a candidate has been given a conditional offer of employment.”