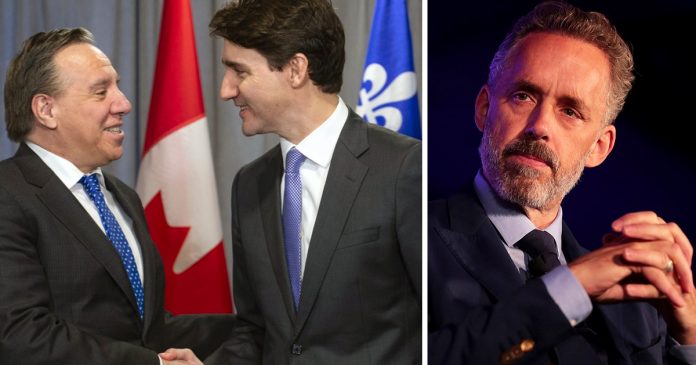 Peterson said in a tweet on Sunday that Legault should be ashamed for implementing the new curfew in Quebec. He compared the situation to one in the Netherlands where police recently attacked protestors with clubs and set dogs on them.

“What you are doing is appalling and wrong,” said Peterson. “Have you seen what is happening in Amsterdam?”

Peterson went on to chastise Trudeau for demonizing unvaccinated people in a recent interview.

“And you, @JustinTrudeau, accusing your own citizens of misogyny and racism just because they object to your moralistic coercion,” said Peterson.

Trudeau made the comments in French to a Quebec television show, claiming that unvaccinated people are often bigots and asking whether Canadians – and whether even he himself – should accept their very presence.

“They don’t believe in science/progress and are very often misogynistic and racist,” Trudeau said. “This leads us, as a leader and as a country, to make a choice – do we tolerate these people?”

Former Canadian ambassador to Israel Vivian Bercovici chimed in, saying Trudeau was adopting “the rhetoric of tyranny” by singling out unvaccinated people.

Peterson has called for people to defy the lockdown measures in Quebec and British Columbia, even going so far as to urge civil disobedience.

Quebec introduced its new curfew on Friday, which covers the hours between 10 p.m. and 5 a.m. The government brought back the lockdown measure because of high COVID-19 case counts stemming from the Omicron variant.

According to the curfew, people can stay out if they are doing activities such as commuting to work, heading to a pharmacy or going to a medical appointment. Quebecers were originally prohibited from walking their dogs during curfew hours, but the government backtracked following public outrage.

In another tweet on Dec. 23, Peterson slammed the CBC and other legacy media, saying they were “in an unrecoverable death spiral.”