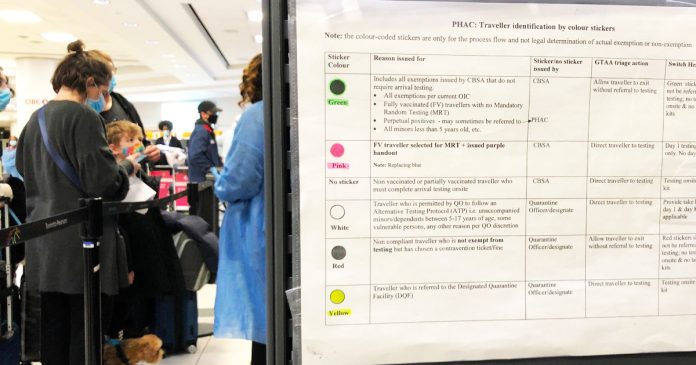 There are countless examples showing how little sense the federal government has shown in its handling of the COVID pandemic over the past two years.

Nowhere is this better illustrated than with international travel.

Take Daniel, a 27-year-old Torontonian who asked not to have his last name used. Despite  having followed all the rules and requirements, he found himself subject to policies and practices that had him shaking his head.

“The entire experience was just horrible and uncalled for,” he said. “It was very clear the government has zero regard for its citizens and zero trust in its own policies.”

Daniel was fully vaccinated and had his booster when he and his girlfriend landed in Toronto from Florida a few days ago. He’d also taken not one, but two, PCR tests prior to leaving Florida.

Both tests were negative.

But to his surprise, Daniel found himself shuffled into a line-up with hundreds of others to take another PCR test from government workers dressed in full personal protective equipment (PPE).

He got the pink sticker on his passport, his girlfriend the green. Pink, as he was to discover, meant he was selected for a “mandatory random” PCR test. Green offered a full exemption from any further testing.

He stood crammed into a line-up with no social distancing measures whatsoever, he said.

Daniel had heard the Ontario government recently announce they were limiting access to PCR tests to high-risk individuals with COVID symptoms. Subsequently, the tests would not be available for everyday people unless they paid for one at a private clinic.

“I think that’s what bothered me the most,” Daniel said. “The government was saying there is a shortage of PCR tests (for those who truly need to be tested), but thousands are being tested everyday at Pearson airport.”

Ottawa’s draconian travel restrictions were put in place in Feb. 2021 – months and months after hundreds of flights containing infected passengers landed in Toronto and airports across the country. The infected passengers were not tracked or tested.

After the prime minister was embarrassed into doing something, Trudeau chose to mandate an expensive and highly problematic hotel quarantine – punishing even those who returned to Canada fully vaccinated.

Those who refused to go to a government-ordered hotel were fined as much as $5,000 – even if they were already vaccinated. In fact, the federal government refused to accept the status of those vaccinated outside of Canada until mid-summer of 2021.

I know because I was one of them.

Despite being double-vaccinated, I was forced to quarantine for 10 days upon returning to Toronto from Florida in May 2021.

Until Aug. 2021, Ottawa permitted U.S. citizens to cross the border by plane but not by car.

The edicts made no sense then, and nothing much has changed. As I wrote in an earlier piece, Ontario and Florida are different worlds, and Ford’s new lockdowns have only made things worse.

Daniel flew out of Florida, but his headaches didn’t begin until his plane landed in Toronto. The passengers were told that because of COVID they could only deplane 50 at a time, with 10-minute intervals between groups.

He said he was not sure of the purpose of that. They’d already been in the same cabin for three hours breathing the same air and would be crammed into the same customs line once they got off the plane.

Although others were told to isolate for up to 72 hours until receiving the test results, Daniel said he received no such instructions.