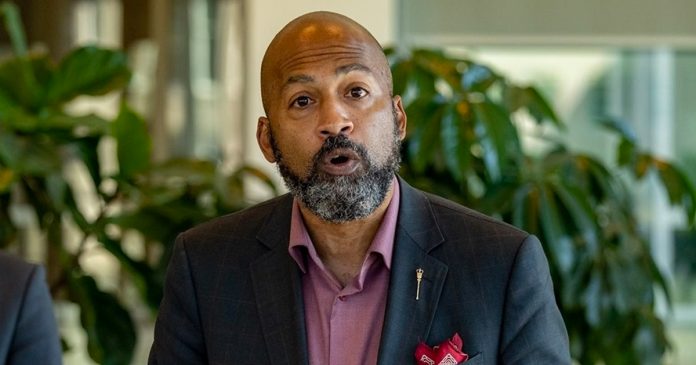 Alberta’s New Democratic Party health critic has said he’s open to the idea of forcing Canadians to get COVID-19 shots.

Edmonton NDP MLA David Shepherd made the comments on Monday when asked about Federal Liberal health minister Jean-Yves Duclos saying that provinces might want to have a “conversation” with the feds about making vaccines mandatory for Canadians.

“Certainly, we have called for vaccine clinics in schools and access to be there for it to be as ridiculously easy for Albertans as possible to access the vaccine. I think those are steps we need to take first and then the other discussions would take place after.”

“Certainly, we see that Alberta as amongst the lowest – I think, one of the two lowest – provinces in Canada in terms of uptake, in terms of the paediatric vaccine for those aged 5 to 11, and that is deeply concerning,” said Shepherd.

Alberta premier Jason Kenney vowed on Friday that his government would entertain no discussions of forcing Canadians to get vaccinated.

“Alberta’s Legislature removed the power of mandatory vaccination from the Public Health Act last year and will not revisit that decision, period,” Kenney tweeted. “While we strongly encourage those who are eligible to get vaccinated, it is ultimately a personal choice that individuals must make.”

John Carpay with the Calgary-based Justice Centre for Constitutional Freedoms (JCCF) told True North that Shepherd’s position on vaccination is not only unconstitutional but also unscientific.

“There is no medical or scientific basis for violating that Charter right because we all know that the vaccines don’t stop the spread.”

Carpay also warned that even though Kenney has removed the power of mandatory vaccination from Alberta’s Public Health Act, a newly-elected NDP government could just as easily restore it.

“That legislation can be changed at the drop of a hat by whichever party has a majority in the Alberta legislature,” he said. “That can be done quite easily.”

A Leger poll for Postmedia in December put the Alberta NDP 11 points ahead of the UCP in Alberta, with 43% of decided voters opting for Rachel Notley over Kenney.”