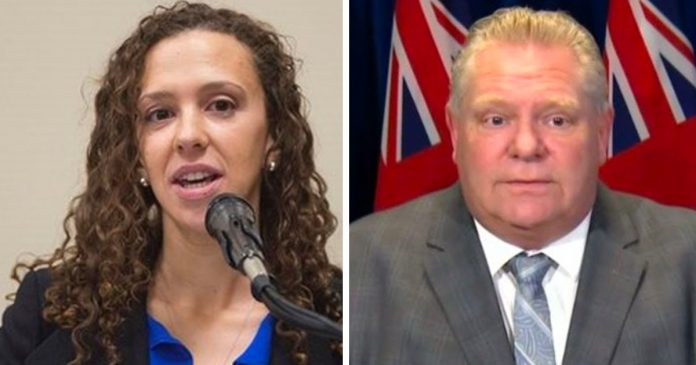 Ontario has signalled that it will not follow in the footsteps of Quebec and institute a tax on the unvaccinated, but an Ontario MPP is saying that the government’s past decisions paint a different picture.

On Wednesday, Chief Medical Officer of Health Kieran Moore told reporters during a COVID-19 update that Quebec’s approach seemed “punitive” and would not be adopted in Ontario.

“It does, in my mind, seem punitive. Only in the highest-risk settings have we mandated it, and that was in the long-term care facilities where all of us have realized the increased death rate, the increased risk of severe (COVID-19) outcomes had to be balanced by maximizing immunization and protection of those individuals,” said Moore.

“That is as far as this government has gone in terms of mandating vaccination, and putting a penalty on those who have not been vaccinated has not been entertained by this government.”

New Blue Party of Ontario MPP Belinda Karahalios told True North that Ford has been telling Ontarians one thing and saying another behind closed doors.

She added, “the Ford PCs also initially made statements in the legislature saying they would support Bill 12 (mandatory COVID-19 vaccination in education and healthcare) but in response to opposition by the New Blue, the Ford PCs reversed course.”

Despite Moore’s assurances that Ontario would not force vaccination onto its citizens, the provincial government has walked back on similar promises in the past.

At the tail end of 2021, Moore also pledged not to shut down schools, but the government flip-flopped on that position as well.  After suddenly announcing that schools would indeed be shut down after New Year’s for in-person learning, the Ford government said Monday that they would resume Jan. 17.

Currently, Ontarians are required to show vaccine passports to access basic services such as restaurants, event venues and sports arenas, among other locations.

In Quebec, Premier François Legault announced a vaccine mandate on Tuesday which when in place would charge Quebecers an undefined health tax for refusing to get a COVID-19 shot.

Alberta and Saskatchewan have also announced they are not considering such a mandate.