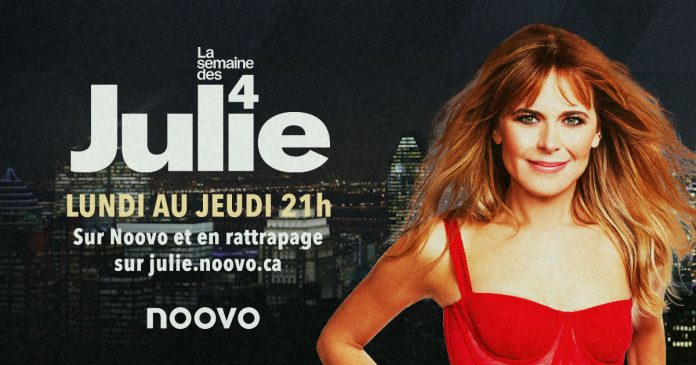 Two days after a Quebec TV show featured children calling for the arrests and forced vaccinations of Canadians who haven’t had COVID shots, a petition calling for the show to be taken off the air has gained over 45,000 signatures.

The Change.org petition was started by Mikael Boutin, who claims the Jan. 18 episode of the talk show La semaine des 4 Julie used children to promote hateful propaganda against Canadians.

Boutin is hoping his petition will send a message to the director of the show’s network Noovo that hateful content is unacceptable and that the show’s host Julie Snyder no longer deserves to be in the public eye.

Snyder caused outrage after questioning her child guests – a girl and a boy, both around ten years old – about COVID-19 vaccination. The two children appeared alongside elementary school teacher Marie-Ève Lévesque.

Snyder first asked the children if they had been vaccinated against COVID-19, to which the girl replied that they had both received their first dose. Snyder then asked whether they supported making the vaccine mandatory, to which both kids responded “yes.”

Snyder went on to ask the children their thoughts on what should be done with those who do not want to be vaccinated.

The boy said the police should be called on them.

The girl said that if people “don’t have their vaccine, it can put a lot of people in danger.” She then added, “so like the government is doing right now, we have to cut things from them little by little until they’ve had enough and get vaccinated.”

Their answers prompted applause from the audience and praise from Snyder herself, who said, “it looks like we have future politicians beside us.”

Since the show aired, the Canadian Broadcast Standards Council (CBSC) say they’ve received a large number of complaints. They have since stopped taking them, however, claiming the high volume is affecting their technical capacities.

The controversial segment has received condemnation from some Canadian politicians, including People’s Party of Canada leader Maxime Bernier, who called it “fascist propaganda.”

The Conservative Party of Quebec also commented on the matter, stating in a French tweet “you thought there was nothing more embarrassing for Quebec’s image than the video of “influencers” partying on a plane?”

The outrage led to an eventual apology from the show’s host.

“I apologize to those who were offended by this. I am very sorry,” tweeted Snyder on Wednesday.

However, True North has learned this isn’t the first time Snyder has had kids on her show to “discuss” COVID-19 issues.

A segment from another episode of La Semaine des 4 Julie found on Facebook shows children in a classroom setting promoting lockdowns and masking.

“We have to lock up people in their homes because if not, they will start to talk and touch each other and they will all give each other the virus, and then give it to others and others, which will just mean that everyone will have it and many people will die,” said a young girl.

When asked about ways to protect himself from COVID-19, a boy replies that we should “always wear a mask, like when you see a friend, because your germs can go onto the person.”

The incident is only the latest controversy out of Quebec, which has brought in some of the harshest measures in North America to fight COVID-19.

The Quebec government announced earlier this month that it would be levying a “significant” health tax on the unvaccinated and that a third dose would be required for its vaccine passports.