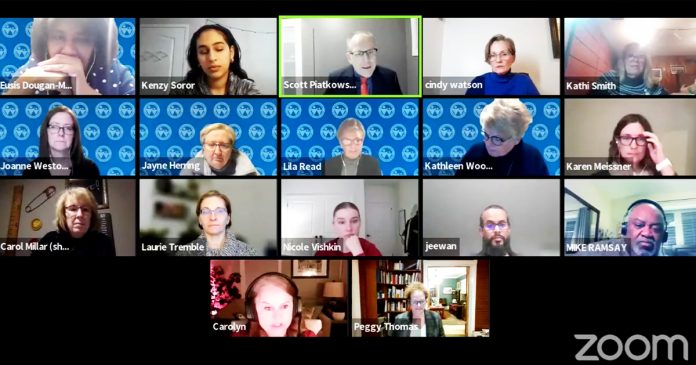 Claiming it to be a violation of the Ontario Human Rights Code, officials at the Waterloo Region District School Board (WRDSB) have decided not to post the video of a controversial public meeting where a long-serving teacher was cut off for questioning the value of two highly sexualized children’s books in school libraries.

WRDSB board chair Scott Piatkowski tweeted Thursday night that the customary YouTube video of Monday night’s public meeting had not been posted, as the Board is “concerned about potential violations” to the Human Rights Code and the “harm” that could befall students, staff and communities in Waterloo Region.

Piatkowski had previously tweeted that the video should be posted, but with a “trigger warning.”

Reports indicate that the teacher who spoke to the board, Carolyn Burjoski, has been given a “stay-at-home” order and told not to communicate with anyone. An outside investigator has also been appointed to review what she said.

It is perhaps the most egregious example of public officials trying to obliterate any record of a publicly held debate. Their efforts to censor border on immoral.

True North was able to obtain a copy of the video and posted it in its entirety. You can watch the video here.

When speaking to the WRDSB on Monday, Burjoski had merely referred to the age appropriateness of two books now widely available in Waterloo Region elementary schools.

One is called Rick by Alex Gino in which a young boy talks to his friend about loving “naked girls.” Confused why he himself doesn’t, the friend thinks he’s asexual.

Burjoski, who has taught for twenty years, also referred to a book called The Other Boy by M.G. Hennessy in which a teen about to transition from female to male with hormone blockers and testosterone is informed the procedure may leave its subject infertile. The book portrays the young girl’s response to that revelation as “cool.”

Barely four minutes into her presentation, Piatkowski had ruled Burjoski be stopped, saying her speech violated the discriminatory provisions of gender expression and gender identity under the Human Rights Code.

Piatkowski and trustees Jayne Herring and Karen Meissner (an NDP candidate) took to Twitter following the meeting to repeatedly claim that harm was caused to trans children by the teacher, who merely quoted from the two books WRDSB officials had chosen to put in school libraries.

The trustees either did not respond or closed off comments by those endeavouring to question them – including myself – as to what they considered transphobic in Burjoski’s speech.

At one point after trying to publicly humiliate Burjoski, Piatkowski shut off comments on his social media feed, claiming his mental health had been impacted.

A YouTube video of the debacle was first posted by parents, but the board had the video taken down, claiming copyright infringement.

All told – and sadly – these actions bring to mind the McCarthy era, a time in America’s history when efforts were made to expose supposed communism. Only this time, it is those who subscribe to Marxist ideology who are trying to censor rational thought.

One wonders if this is about the fact that Burjorski exposed these outrageous books and not about hate or transphobia at all.