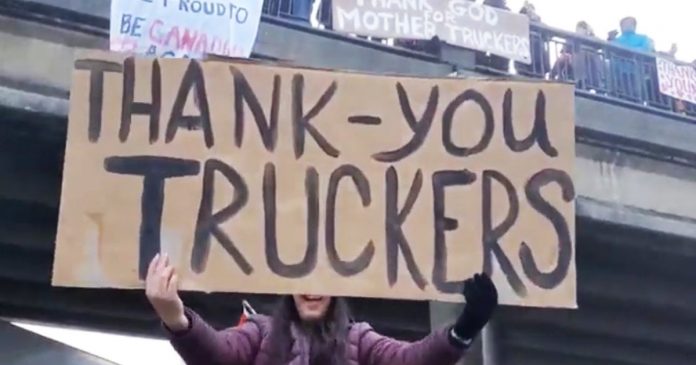 Crowdfunding for the Freedom Convoy 2022 truckers’ protest has already sped past the $3 million mark, with no sign of slowing down.

Tamara Lich of Medicine Hat, Alberta launched the protest’s GoFundMe on Jan. 14. Fleets of trucks departed from multiple points across the country on Sunday and are expected to converge on Ottawa within a week.

“It’s our duty as Canadians to put an end to these mandates,” Lich wrote on the page. “It is imperative that this happens because if we don’t, our country will no longer be the country we have come to love.”

Lich said that participants with the Freedom Convoy are “doing this for our future generations and to regain our lives back.” The page said donations would help with covering the costs of drivers’ fuel, food and shelter.

“It’s a small price to pay for our freedoms,” she said. “We thank you all for your donations and know that you are helping reshape this once beautiful country back to the way it was.”

Addressing concerns raised by opponents of the convoy about the nature of its activities, GoFundMe said in a statement to CTV News on Sunday that funds will be held until the organizer can prove how they will be dispersed.

“We require that fundraisers be transparent about the flow of funds and have a clear plan for how those funds will be spent,” said GoFundMe. “In this case, we are in touch with the organizer to verify this information.”

The Canadian Trucking Alliance (CTA) also condemned the convoy in a statement on Saturday.

“CTA believes such actions – especially those that interfere with public safety – are not how disagreements with government policies should be expressed,” said the organization in a press release. “What is not acceptable is disrupting the motoring public on highways and commerce at the border.”

Truck drivers from across Canada have organized Freedom Convoy 2022 to demand all vaccine mandates end. Their protest comes just over a week after the Canadian government enacted a mandatory vaccine policy for cross-border truckers.

An email obtained by True North showed that convoy organizers would begin a “slow roll” from multiple border points on Sunday and head towards Ottawa.

Organizers said they wanted the government to know that mandatory vaccines “will not be tolerated.” They claim that similar mandates in health care and aviation have been disruptive and would lead to further repercussions.

The vaccine mandate for truckers took effect on Jan. 15. It removed the existing exemptions for Canadian truckers from testing and quarantines, requiring they be fully vaccinated.

The CTA estimates as many as 32,000 Canadian and American cross-border truck drivers may be taken off the roads as a result of the mandate – approximately 20% of the 160,000 truckers total.