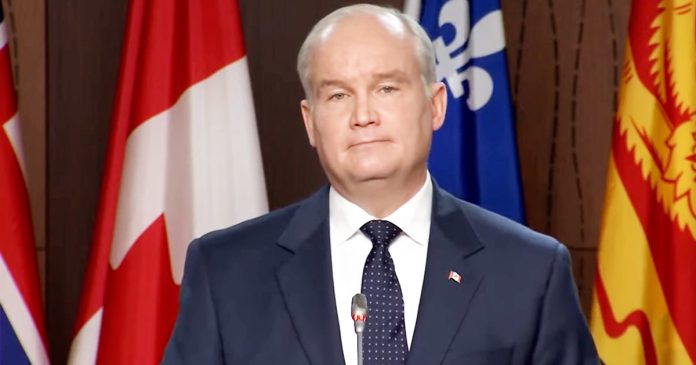 When pressed by reporters during a media conference, O’Toole evaded several questions about whether he would meet with the truckers when they arrived in the capital later this week.

“I support getting as many people vaccinated as possible including truckers and I probably – with the exception of a few doctors who are on TV everyday – I’ve probably encouraged vaccination more than any Canadian and that’s our most critical tool to reduce the severity of COVID but also to get this public health crisis under control,” said O’Toole.

Despite the media asking a number of follow-up questions, the leader of the opposition still couldn’t give a definitive answer. Even during an interview on CTV’s Power Play, O’Toole continued to be unclear on whether he would appear at the protest.

“We’ve been meeting with them for the last few months and I will continue to meet this week and into the weekend with truckers and with the industry – both individual people suffering but also the industry,” said O’Toole.

Earlier this month, the Liberal government confusingly undid an apparent reversal on vaccine mandates for cross-border truck drivers. After stating the mandate would not go into effect, Liberal health minister Jean Yves-Duclos claimed that the reversal was “provided in error.”

Since the mandate began on Jan. 15, trucking companies across Canada have been reporting a shortage of drivers. Some workers are reportedly walking off the job.

Estimates by the CTA show that the mandate could force 10% to 20% of Canadian truck drivers – between 12,000 and 22,000 essential workers – off cross-border routes, which would have significant impacts on the country’s supply chain.

Despite O’Toole’s waffling, a number of Conservative MPs have spoken out publicly in support of the truckers currently making their way across the country.

Conservative MP Martin Shields recently posted a video of himself awaiting the convoy in front of Parliament.

“I am in Ottawa awaiting the trucking convoy on its way to the capital,”  tweeted Shields.
“Canadian supply chains are critical and the Trudeau Liberal government’s mandates and freedom-curbing restrictions have gone on too long.

“It’s time to get our freedoms back.”