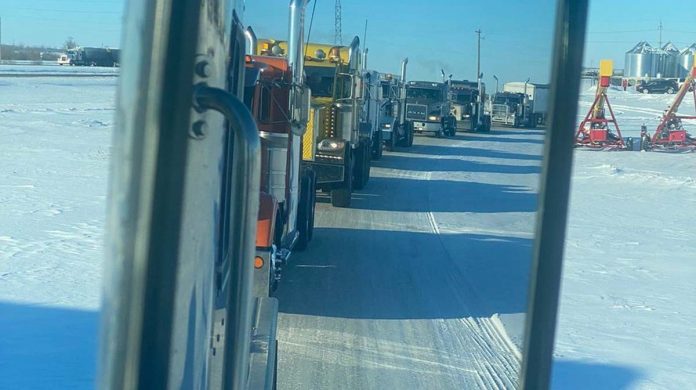 On day 3 of the Truckers for Freedom Convoy, the large Western fleet made its way through Saskatchewan and Manitoba, an Eastern convoy out of Newfoundland began rolling and Conservative MPs jumped on board to show their support.

In the early morning hours, crowds in Saskatchewan lined the roads in support of the truckers.

Later on as the convoy made its way through Manitoba, huge crowds gathered in Brandon to celebrate the truckers.

This was the scene in Brandon, Manitoba.

As the truckers made their way through Winnipeg, huge crowds greeted the convoy.

This was the scene earlier today.

In Newfoundland, a group of truckers began their roll into Ottawa as they left the island.

Supporters can be seen lining this overpass as the Newfoundland truckers roll on.

As momentum and support continued to grow across Canada for the convoy, Conservative MPs broke ranks with Erin O’Toole and began throwing their support behind the truckers.

Most notable of the MPs that voiced support for the convoy today was Deputy Leader of the Conservative Party, Candice Bergen and former leadership candidate Leslyn Lewis.

The GoFundMe in support of the truckers at the time this article was published has reached $4,858,580.