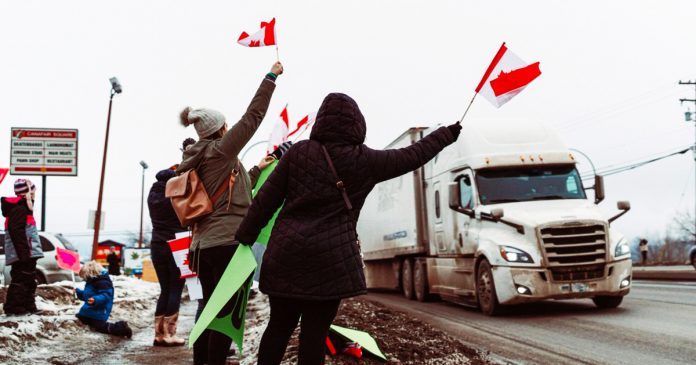 On Day 4 of the Truckers for Freedom Convoy, the Western fleet began rolling through Ontario, the Eastern fleet headed across Nova Scotia and Prime Minister Justin Trudeau attacked the movement as a “small, fringe minority.”

The large Western fleet of truckers began making their way through Northern Ontario, passing through Kenora, Dryden and Thunder Bay.

Early on Wednesday, supporters of the convoy can be seen lining the side of the road in Kenora, Ontario.

Here, truckers can be seen lined up bumper-to-bumper in Dryden, Ontario.

By the end of day, truckers had reached Thunder Bay, met with massive crowds and loud cheers.

In Southern Ontario, truckers continue to do “slow roll” protests near the border as they get set to depart for Ottawa at 5:30 tomorrow morning.

On the East Coast, the large fleet of truckers from Newfoundland made their way into Nova Scotia. Huge crowds lined overpasses welcoming them into North Sydney.

This was the scene earlier today.

As Conservative MPs continued to show support for the truckers, legacy media outlets including Global News, the National Post and the CBC published articles smearing the peaceful protestors as “white-nationalists” and “far-right,” even going as far as to call them “domestic terrorists.”

However, as True North’s Cosmin Dzsurdzsa reported, legacy media journalists have paid no attention to the vitriol spread by the convoy’s opponents using the #FluTruxKlan hashtag. Opponents of the Ottawa-bound convoy often used threats of violence themselves, as well as words like “vermin,” “plague rats,” “dirty,” “white trash” and other abhorrent terms.

The GoFundMe in support of the truckers at the time this article was published has reached $5,725,560.