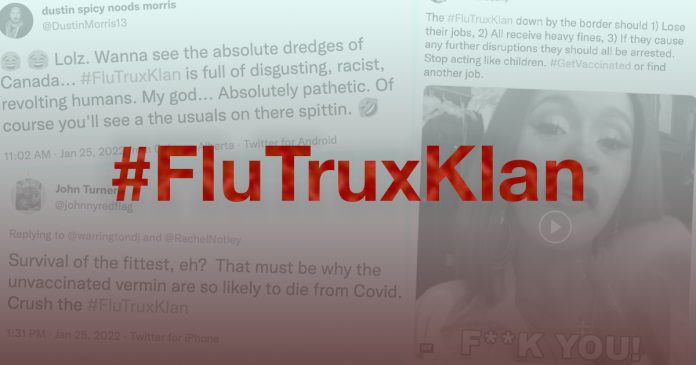 While overwhelming support for the Truckers for Freedom Convoy has poured in from across Canada, a malicious hashtag seeking to delegitimize the movement is exposing the deep hatred some opponents have for the convoy.

#FluTruxKlan has become a popular banner for those opposed to the hundreds of thousands of truckers and their supporters who are calling for an end to COVID-19 mandates and the deterioration of rights at the hands of Prime Minister Justin Trudeau.

True North has found that in their attempts to accuse truckers of violence and racism, opponents of the Ottawa-bound convoy often used threats of violence themselves, as well as words like “vermin,” “plague rats,” “dirty,” “white trash” and other abhorrent terms.

Twitter users who have levelled these accusations against their fellow Canadians have been egged on by legacy media reports painting the Freedom Convoy as so-called “white nationalists,” “far-right” and “domestic terrorists.”

Mainstream journalists have paid no attention to the vitriol spread by the convoy’s opponents, but this hasn’t stopped them from cherry-picking a few bad actors who have used the peaceful protest to spread extremist ideas.

Convoy leaders have also distanced themselves from radicals seeking to attach themselves to the protest, claiming that those with extremist views are not welcome and should stay home.

Threats of violence, calls for arrest of peaceful protestors

Threats of violence against truckers and their supporters are common among the anti-convoy crowd. Some have called for authorities to arrest them, for heavy fines and for truckers to lose their livelihoods.

One woman using the hashtag explained how she taught he children to “punch Nazi’s” (sic) and those “espousing similar values” as the Freedom Convoy supporters.

Racist terms such as “white trash” made a frequent appearance.  Meanwhile, other Twitter users resorted to dehumanizing terms such as “vermin” and “ plague rats” to describe their fellow Canadians.

Survival of the fittest, eh? That must be why the unvaccinated vermin are so likely to die from Covid. Crush the #FluTruxKlan

Yes, the #FluTruxKlan isn’t very bright, they think they will convince the USA to let unvaxed plague rats in.

Others called the freedom protestors “revolting humans” and “disgusting creatures” for opposing vaccine mandates and the deterioration of human rights. One Twitter user even called the truckers “dirty, and gross and a biosecurity risk.”

Accusations of treason and terrorism

Egged on by media reports comparing the convoy to the Jan. 6 United States Capitol attack, those who employed the #FluTruxKlan hashtag have also accused truckers and their supporters of being treasonous and engaging in domestic terrorism.