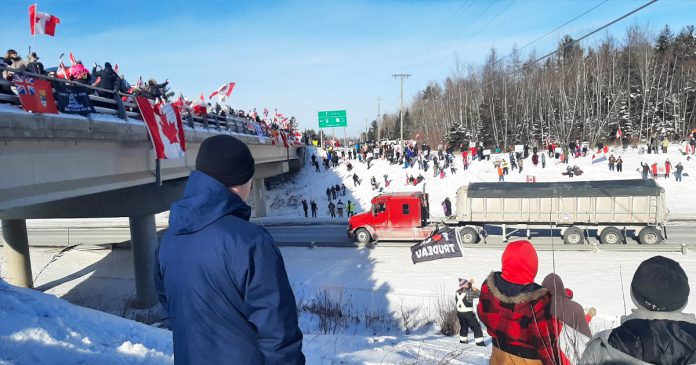 On Day 5 of the Truckers for Freedom Convoy, the Western fleet was met by huge crowds as it rolled through the Greater Toronto Area (GTA), the Eastern fleet headed across New Brunswick and billionaire Elon Musk declared, “Canadian truckers rule.”

Throngs of cheering supporters greeted the Western fleet of the convoy on Wednesday as it made its way through the GTA.

Supporters gathered at Vaughan Mills mall outside of Toronto to celebrate the truckers and to hold a rally of their own.

City of Toronto traffic cameras grabbed this footage of the convoy as it went up the 401.

This was the scene over another 401 overpass today.

Here is the convoy rolling through Port Hope later on.

Before bedding down in Kingston, Ontario for the night, the truckers rolled through Belleville, Ontario.

This was the scene in Belleville, where hundreds of flag-waving supporters came out to greet the convoy.

Crowds can be seen lining the roads in Kingston, cheering and honking their horns for the first trucks to arrive.

The Eastern fleet was met by huge crowds in Moncton, New Brunswick today.

Here is some footage of the supporters that lined a Moncton overpass.

In Ottawa, Conservative Party leader Erin O’Toole finally decided to join the rest of his caucus in supporting the convoy, saying in a video posted to Twitter, “this policy on our truckers is an attack on common sense, and it’s an attack on every Canadian’s household budget.”

O’Toole went on to  say, “we need to show our truckers we appreciate their hard work and that we are going to stand up for their right to peacefully protest.”

Speaking at a press conference, O’Toole confirmed that he will be meeting with the truckers when they arrive on Saturday.

Before entering a caucus meeting this morning, Conservative finance critic Pierre Poilievre was asked by a legacy media reporter about “the extremist elements trying to latch on to the truck convoy”.

In response, Poilievre told reporters that truckers “have kept all of you alive over the past two years.”

Joe Rogan also endorsed the truckers in a recent episode of The Joe Rogan Experience podcast, saying, “apparently, they are all being mandated to be vaccinated. They’re like, ‘Hey, we’re not even in contact with anybody. We’re in our truck. Like, we just drive.’”

Mike Fisher said on Instagram, “to the truckers, I can’t thank you enough. You guys are going to change the country for the better.”

The GoFundMe in support of the truckers at the time this article was published has reached $6,585,800.