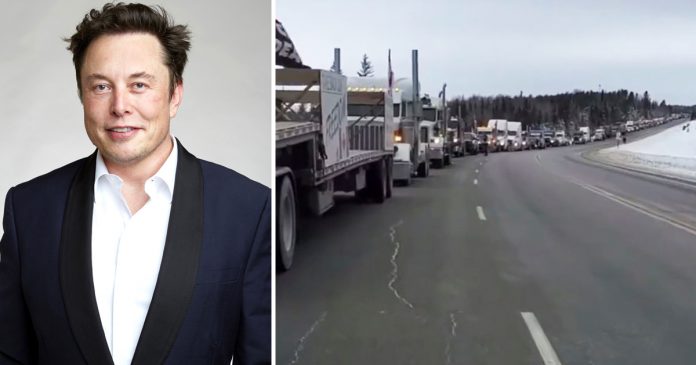 SpaceX and Tesla CEO Elon Musk tweeted in support of the Truckers for Freedom Convoy on Thursday as protestors approached Ottawa to demand an end to COVID-19 mandates and the deterioration of civil liberties under Prime Minister Justin Trudeau.

Tens of thousands of truck drivers are currently passing through southern Ontario as supporters cheer from bridges and the sides of highways. Another fleet of the convoy is making its way in from the East Coast.

Musk was not the only American to support the freedom movement brewing in Canada. In applauding the truckers, Musk stood with world-famous podcaster Joe Rogan who, in a recent episode of The Joe Rogan Experience, pointed out the huge number of truckers who have joined the convoy.

“It’s a giant convoy of trucks,” said Rogan. “That’s apparently some insane amount of people. Fifty thousand trucks are headed to Ottawa to protest the vaccine mandates by Trudeau.”

“Apparently, they are all being mandated to be vaccinated. They’re like, ‘Hey, we’re not even in contact with anybody. We’re in our truck. Like, we just drive.’”

Musk and Rogan’s support for the convoy comes in addition to other celebrities speaking out, including actor Rob Schneider and former NHLers Theoren Fleury and Mike Fisher.

The freedom convoy was prompted by the federal Liberal government implementing a vaccine mandate requiring all cross-border truckers to be fully vaccinated against COVID-19 to continue driving their routes.

News of the mandate prompted immediate condemnation from within the trucking industry and some members of the Conservative opposition.

Most recently, Conservative finance critic Pierre Poilievre blasted the legacy media for unfairly painting the truckers and their supporters as extremists. Poilievre pointed out Thursday how hypocritical their coverage was when left-wing protestors took to the streets.

“Well, you know, what I think is interesting is that when there’s a left-wing protest on Parliament Hill, we don’t see the Liberal media going through every single name of the people who attend to try and find one person they can disparage the whole group with,” said Poilievre on Thursday.

Parts of the convoy are expected to arrive in Ottawa today and to continue pouring in until Saturday, with protests planned throughout the weekend.