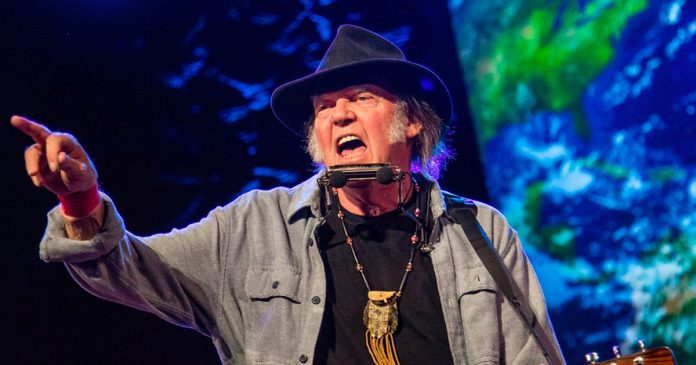 Spotify is removing Canadian-American singer Neil Young’s music from its streaming platform after the artist told it to choose between his songs and “The Joe Rogan Experience.”

Young – perhaps best-known for his 1989 hit “Rockin’ in the Free World” – had made the ultimatum to Spotify on Monday. According to him, “The Joe Rogan Experience” was pushing misinformation on impressionable youth.

Spotify began steps to remove Young’s music Wednesday. While Young’s channel has about 6 million listeners per month, Rogan’s podcast has an estimated 200 million.

Young said he was taking his position because Spotify, through Rogan’s podcast, was “spreading fake information about vaccines – potentially causing death to those who believe the disinformation being spread by them.”

“I want to thank my truly great and supportive record company Warner Brothers-Reprise Records for standing with me in my decision to pull all my music from Spotify,” said Young in a statement on his website on Wednesday. “My friends at Warner Brothers-Reprise stood with me, recognizing the threat the COVID misinformation on Spotify posed to the world.”

The musician said most of the people who are listening to Rogan are “24 years old, impressionable and easy to swing to the wrong side of the truth.”

These people, he said, believe Spotify would never broadcast misinformation, but they are wrong. He said he had to point out these lies.

Young thanked the many people who reached out to him praising him for taking his position, saying that he has “never felt so much love coming from so many.” He called on other artists to move off of Spotify.

“The Joe Rogan Experience” is the most popular podcast on Spotify in Canada and the English-speaking world.

Young has a history of supporting left-wing causes.

In 2014, he criticized former prime minister Stephen Harper and Alberta’s oilsands, saying that Canada was “trading integrity for money.”

In 2006, he released a song called “Let’s Impeach the President,” which demanded former U.S. president George W. Bush be removed from office.