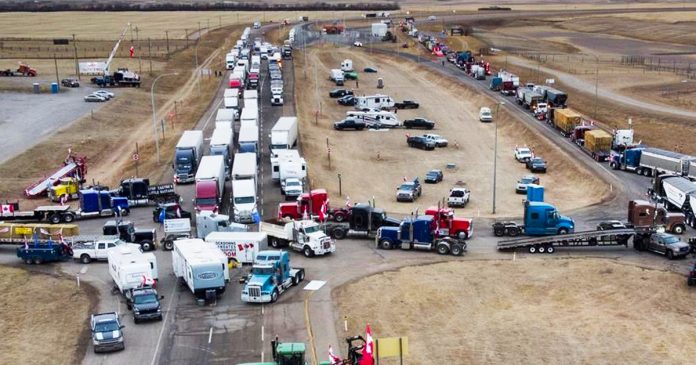 On Day 9 of the Truckers For Freedom Convoy, Prime Minister Justin Trudeau emerged from hiding to demonize peaceful Canadian protestors, truckers in Alberta blockaded the US border and a Conservative caucus revolt threatened to turf Erin O’Toole as leader.

MPs returned to Parliament today after a weekend of monumental protests. The Freedom Convoy that inspired the world and united the country came together with one message – that vaccine mandates and COVID restrictions must come to an end.

The trucks that arrived in Ottawa on Friday and Saturday hadn’t moved an inch on Monday morning despite calls from city officials and Liberal MPs.

This was the scene of the convoy earlier today.

Trudeau emerged from hiding this morning to vilify the protesters, claiming that Canadians were “shocked and disgusted” by the scenes of national unity and patriotism on display over the weekend.

When asked by the CBC if he was being fair to paint the entire convoy with the same brush when a tiny handful of people had caused some problems, Trudeau doubled down, saying, “(a)nyone who is part of this group who is disgusted by what the folks protesting alongside are doing needs to step up and take responsibility, condemn these actions and look for other ways to express their displeasure.”

Trudeau then lashed out at Conservative politicians who had spoken with the peaceful protesters over the weekend – some, their own constituents – to better understand their frustrations. Trudeau told them to “think long and hard” about their decision to “exploit people’s fears.”

Before going back into hiding, Trudeau took one last opportunity to insult his fellow Canadians, calling those who claimed to have been injured by COVID vaccines “tin-foil hat” -wearing conspiracy theorists.

Protestors gathered once again in Ottawa to listen to speeches and make their voices heard.

Dr. Julie Ponesse of the Democracy Fund declared to a large crowd that “the pandemic is over!”

Ponesse went on to remind the politicians sitting in Parliament that the people are not their subjects.

Meanwhile in Alberta, another massive convoy formed a blockade of the US border crossing to Montana and are now in a standoff with Canadian border authorities and the RCMP.

This is what it looked like in Coutts, Alberta this morning.

This footage shows the size of the convoy that made its way to the border.

As the RCMP moved in and surrounded the truckers, the organizers met in a local bar to vote on whether to hold the line or give up.

Not surprisingly, the truckers decided that they weren’t going to move their rigs. One said that the only way he was leaving was “in a cruiser.”

“This country right now is like a raw nerve, and the prime minister is jumping up and down on it with his inflammatory rhetoric. We’re talking about 14-year-olds that are suicidal after two years of lockdowns. I just spoke to a waitress whose business was wiped out by lockdowns. I’m talking to truckers who have been serving food on our plates. These are the very people –  honest, hard-working, shirt-off-your-back-type people – that this prime minister keeps attacking!”

Bergen told the Liberals across the aisle that the Conservatives condemned all hateful acts –  including beheading statues, wearing blackface and burning churches.

The Conservative Party was then rocked late Monday night when The Globe and Mail published a story that confirmed 35 MPs had signed a letter forcing Erin O’Toole to face a caucus review.

The report claims that on top of the 35 that have already signed the letter, a majority of the 119 sitting Conservative MPs have committed to ousting O’Toole.

Alberta MP Bob Benzen was one of the first MPs to go public, declaring in a statement that O’Toole had failed “to clearly stand up for the Charter rights of Canadians during the pandemic.”

True North will continue to bring you daily recaps of the ongoing protests against the federal government as the situation across the country evolves.

The GoFundMe in support of the truckers at the time this article was published had reached $9,464,050.